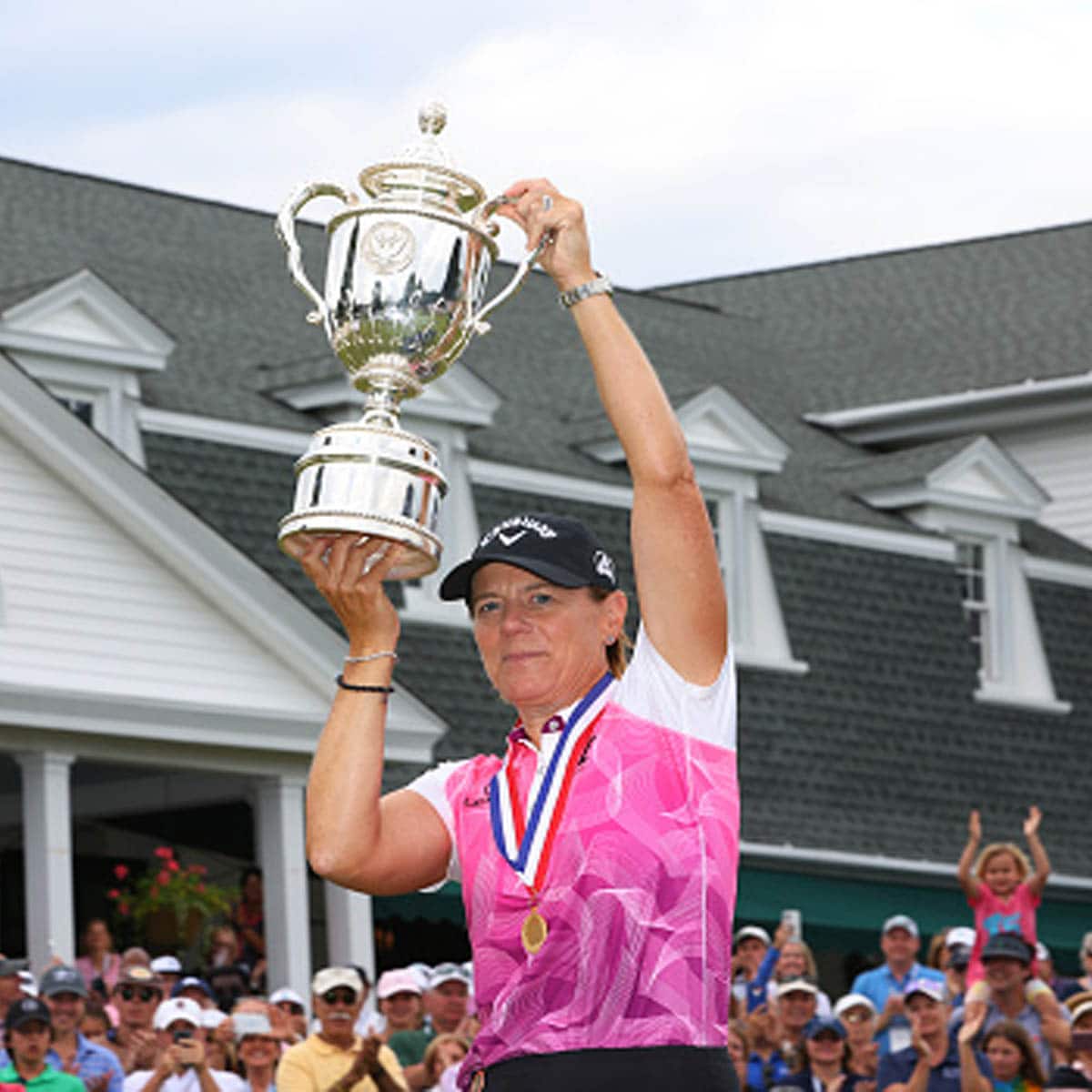 The top 20 richest LPGA players on earth ranked by their net worths can be found below. All of these women are forces on the course, but one athlete’s net worth is far higher than the others.

We have gathered information from several credible sources such as Forbes, The Richest, and Celebrity Net Worth to come up with the net worths of the richest LPGA players in the world.

Before you begin, can you guess the only female golfer to eclipse a net worth of $40 million?

The 20 richest LPGA players on the planet living today according to their 2022 net worths:

Lee Jeong-eun is a South Korean professional golfer who currently plays on the LPGA Tour and the LPGA of Korea Tour. Debuting professionally in 2015, she has already made over $3.5 million in prize money.

Meanwhile, Lee has secured one LPGA Tour victor, which came in 2019 at the U.S. Women’s Open. There is no information regarding the 25-year-old’s endorsements at this point.

Lexi Thompson enters the list of richest LPGA players having taken home roughly $11.9 million in career earnings. She has played in 224 events while winning 11 of them outright.

Moreover, Thompson has inked endorsement deals with brands like Cobra and Puma golf.

Furthermore, Feng received the opportunity of being a brand ambassador for Omega after winning the 2012 Omega Dubai Ladies Masters.

Ariya Jutanugarn is a Thai professional golfer who has brought home $10.3 million while playing on the American-based LPGA Tour. Over 205 events, she has secured 12 victories.

Additionally, Jutanugarn has gained endorsement deals throughout the years with companies such as Titleist, Toyota, KBank, and Thai Airways.

Brooke Henderson is a Canadian professional golfer on the LPGA Tour who won her first major at 18 years old in 2016. Since then, she has amassed a career earnings figure of about $8.6 million.

On top of that, Henderson has sealed an immense amount of sponsorship deals with the likes of Full Swing, Skechers, Google Android, PING, MasterCard, Canadian Pacific, Rolex, and BMW.

Jessica Korda is an American professional golfer who has been playing on the LPGA Tour since 2011. Over that span, she has raked in roughly $6.6 million while winning six matches in 216 tries.

Coinciding with her success are her endorsement deals with brands like Adidas, Titleist, and Grand Thorton.

Ko Jin-Young is a South Korean professional golfer who plays on the LPGA Tour. The 26-year-old has already made about $9.4 million in career prize earnings.

According to Forbes, Jin-Young has inked many sponsorship deals with companies in her native country such as LG Electronics, Korean Air, Jeju SamDaSoo mineral water, and Rejuran skincare products.

While not holding a massive portfolio of endorsements, Angela Stanford has managed to ink partnerships with PureSport as well as the line of Puresilk Shave products.

Joining the LPGA Tour in 2001, Stanford has taken home the victory seven times while finishing in the top 10 on an impressive 100 occasions. In total, she has won about $12.1 million over the course of her career.

Paula Creamer is an American professional golfer on the U.S.-based LPGA Tour who has won 10 different LPGA events. Her career earnings come in at an estimated $12.1 million.

Also, Creamer owns prominent endorsement deals with companies such as TaylorMade-Adidas, Citizen Watch Co., Ricoh, and Bridgestone Golf. Actually, Forbes claims she made about $4.5 million from said deals back in 2013.

Na Yeon Choi is a South Korean professional golfer playing on the U.S.-based LPGA Tour. She has won nine events in 289 different tries, which brought her $10.9 million in winnings.

Moreover, she has signed a couple of notable endorsements with brands Srixon and ECCO Golf.

Nancy Lopez is a retired American professional golfer who joined the LPGA Tour back in 1977. Impressively, she won 48 tour events, including three major championships.

Lopez made an estimated $5.3 million over the course of her storied career on the course.

Lydia Ko knows how to make money along with being a top performer on the course. She is on the list of the richest LPGA players after making $12.7 million in prize earnings while also signing some lucrative endorsement deals.

Notably, Ko signed a deal in 2017 with PXG, which was worth a whopping $14.5 million. Furthermore, she has inked deals with Lululemon, ECCO, and even Lexus as well.

Se Ri Pak is a South Korean former professional golfer, who played on the LPGA Tour from 1998 to 2016. Throughout her career, she took home roughly $12.6 million in prize money.

In 365 tour appearances, Pak managed to win 25 times, which was good enough to get her into the World Golf Hall of Fame.

Stacy Lewis is an American professional golfer on the U.S.-based LPGA Tour who won a pair of major championships and 13 events overall. She made just under $14 million while playing.

You May Also Like:   Vince Wilfork Net Worth: How Rich is the Retired NFL Player?

Inbee Park is a South Korean professional golfer who dominates the LPGA Tour and the LPGA of Japan Tour. The former number one ranked player has won 21 different events, which has brought her just under $18 million in career prize earnings.

Cristie Kerr is an American professional golfer who won 20 events and two major championships while playing on the LPGA Tour. In total, she has won over $20 million.

She has a wide-ranging portfolio of endorsements with brands such as Lacoste, Richard Mille, Titleist, and Double Cross Vodka.

Juli Inkster is an American professional golfer who has been playing on the LPGA Tour for nearly 30 years. Her 31 victories rank second among all active players on the tour.

Also, she has made $14 million in prize winnings, while inking deals with brands like ProQuip.

Lastly, Inkster has been broadcasting as an analyst on the Golf Channel since 2014. However, she has since joined FOX Sports to fulfill the same role as an interviewer and analyst.

Suzann Pettersen is a retired Norwegian professional golfer who won 15 events in 315 tries.

In doing so, she took home just under $15 million. In addition to that, Pettersen signed endorsement deals with many prominent brands like BMW, LG Electronics, Kerr, Lacoste, Mutual of Omaha, Pressel, Polo Ralph Lauren, and Stanford Financial.

Of all the golfers in the top 20 (career earnings), Lorena Ochoa has played the least amount of events but still manages to rank fifth in prize winnings. In 175 events, she won $14.8 million.

Ochoa has reached deals with a trio of high-profile brands, Banamex, Aeroméxico, and Lacoste.

Karrie Webb is an Australian professional golfer who is a member of the World Golf Hall of Fame. In 49 tour appearances, Webb won 41 different times, taking home $20.3 million.

Additionally, Webb has been endorsed in the past by both TaylorMade Golf and Adidas Golf.

Of all the wealthiest golfers on the planet, Annika Sorenstam tops the list of the richest LPGA players. The Swede has won an incredible 72 events which brought her roughly $22.6 million.

Sorenstam has won an insane 10 different major championships over the course of her career.

Lastly, she has had an award named after her titled the Rolex Annika Major Award. Furthermore, Sorenstam has been associated with Lexus throughout her career as well.

Top 20 Richest WTA Players Ranked by Their Net Worth 2022