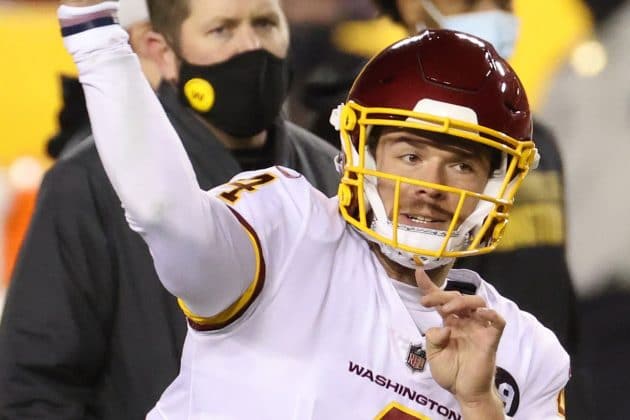 Taylor Heinicke is an American footballer who plays as quarterback for the Washington Football Team of the National Football League. As of 2022, Taylor Heinicke net worth is estimated to be around $1.5 million.

Taylor was born on March 15, 1993, in Atlanta, Georgia to parents Brett Heinicke and Diana Dodsworth. He started playing football at Collins Hill High School. During his time there, he was an all-state selection as a junior. As a senior, he was named to the Old Spice National Player of the Year in Georgia. In his senior season, Heinicke played at the North/South All-Star Football Classic, where he collected 254 yards and three touchdowns to get MVP honors and also helping the North to a 22-0 victory over the south.

In 2015, Heinicke joined Minnesota Vikings as an undrafted free agent. Due to frequent injuries, he was released by the Vikings in 2017. On September 23, 2017, he was signed to the New England Patriots’ practice squad.

On November 29, 2017, Heinicke was signed to the Houston Texans’ practice squad. He made his NFL debut against the Pittsburgh Steelers on December 5, 2017. On April 13, 2018, he was waived by the Houston Texans.

You May Also Like:   Ben Zobrist Net Worth: How Rich is the Baseball Second baseman?

Following that he then played for Carolina Panthers and then St. Louis BattleHawks of the XFL. On December 8, 2020, Heinicke was signed to the Washington Football Team practice squad. He was promoted to the roster on December 19. His first game with Washington came against the Carolina Panthers in Week 16 after Dwayne Haskins was benched in the fourth quarter. He completed 12 of 19 passes for 137 yards and a touchdown during the 20-13 loss.

Anthony Johnson Net Worth: How Rich was MMA Fighter Actually?