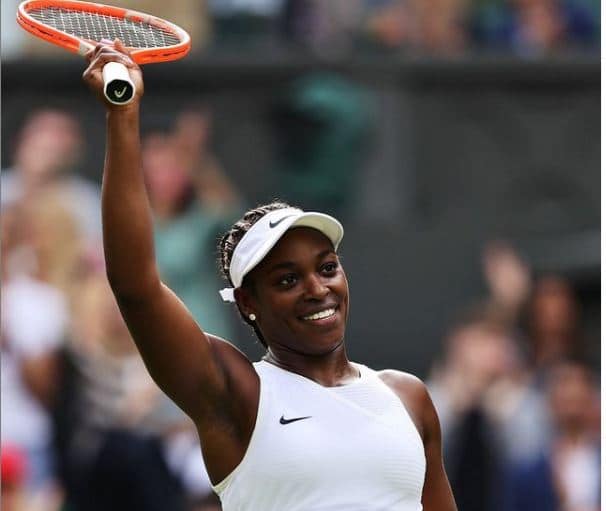 Sloane Stephens is an American professional tennis player. Stephens caught the eye of the entire world of tennis when she was only 19 years old when she beat Serena Williams during the semi-final of the Australian Open who at the time was among the top-ranked tennis players. During her career, Stephens managed to be crowned the winner of the 2017 US Open. As of 2022, Sloane Stephens net worth is estimated to be around $16 million.

Stephens is the daughter of Sybil Smith and John Stephens. Both of her parents were athletes with her father being a Pro Bowl running back while her mother was an All-American swimmer. Yet, her parents had issues in their relationship that led to their separation and Stephens being raised by her mother.

She picked up tennis when she was only nine years old. The coaches there recognized immediately the potential that Stephens had and started to give her more professional training. Soon, she was starting to play in different tournaments as well as winning them.

Sloane Stephens Net Worth and Career

Stephens first came to attention among tennis lovers when she managed to reach the first doubles final of her career during the U.S. Open in 2008. Stephens had victories in the Italian Open as well as the International Spring Championships which gave her a big confidence boost. Her impressive results continued with her now having a 16 match win streak that led to her entry into the top five of the junior rankings.

Stephens then started to progress very quickly into the professional scene since by the end of the 2010 season she managed to jump from the rank of 802 to 198. She would shock many tennis fans when she beat Serena Williams who was ranked third in the world at the time with Stephens still being 19 years of age.

Over the years, Stephens has had many highs and lows too since there have been injuries that led to periods of long absence along with the poor form. In 2021, Stephens is continuing to try and improve her form and is actively participating in different tournaments including the French Open as well as the 2021 Mutua Madrid Open.

Sloane Stephens was childhood friends with Jozy Altidore who would become a U.S. national soccer player. The two started to date as they got older and are now engaged to each other. Sloane is involved in different philanthropic activities through her charity called Sloane Stephens Foundation which was started in 2013.

Among the goals of this charity is to help the underserved youth in bettering their lives by getting early exposure to tennis. In 2017 when Stephens was still recovering from an injury, she went to Indiana University East where she was studying bachelor’s degree in communications studies.

You May Also Like:   Tiki Barber Net Worth: How Rich is the Retired NFL Player?

As of 2022, Sloane Stephens has an estimated net worth of $16 million. Stephens has had a lot of financial success through her professional career where she has earned around $16 million through prize money from the different tournaments. Furthermore, in 2019, she was reported to be in the top five of the most well-paid female athletes having brought in $9.6 million that year alone.

Though Stephens has not been able to maintain consistency in her performances, she has still been able to accumulate a big net worth over the years through both her prize money as well as lucrative endorsement deals. Among her biggest endorsements is for Nike with whom she has a long-term contract. Some of her other major partners include Rolex, Verizon, and Quantum Energy Squares.

Boomer Esiason Net Worth: How Rich is the Retired Quarterback?

Buster Posey Net Worth: How Rich is the Retired Baseball Player?