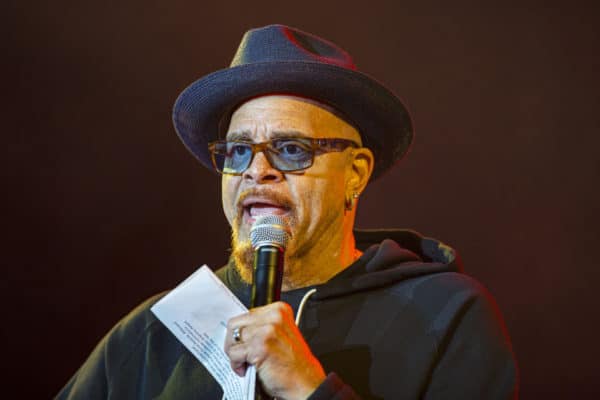 David Adkins, better known as Sinbad is an American stand-up comedian and actor. He is best known for his appearance on his own HBO specials such as “A Different world” and “The Sinbad Show”. Sinbad is also known for starring in various movies such as Necessary Roughness, First Kid, and Planes. As of 2022, Sinbad net worth is roughly $100 thousand.

Sinbad was born on November 10, 1956, in Benton Harbor, Michigan. He was born to Louise and Dr. Donald Beckley Adkins. His father, Dr. Donald was a Baptist minister. Sr. Sinbad grew up with five siblings. For his study, he joined Benton Harbor High School and received a graduate degree in 1974. Then, he studied at the University of Denver from 1974 to 1978.

In his early days, he served as a boom operator in the US Air Force. While serving in the Air Force, he was assigned to the 384th Air Refueling Wing at the McConnell Air Force Base. While performing his Air Force duty, he had to travel downtown most often time. During that time, he used to perform stand-up comedy. In fact, he competed in the Air Forces’ Talent Contest as a comedian/MC in 1981.

The stand-up comedian took the professional name, Sinbad from his admiration for Sinbad the Sailor. Initially, he began his stand-up comedy career by appearing on the TV show, Star Search. In the TV show, he was able to win his round against fellow comedian, Dennis Miller. He even reached the finals before losing to actor and comedian, John Kassir. Thereafter, he was cast on a short-lived sitcom, The Redd Foxx Show.

Then, he starred in the TV sitcom, A Different World. Prior to that, he appeared as a car salesperson, Davis Sarrette on The Cosby Show. He started getting popular in the early 1990s and eventually got The Sinbad Show in September 1993. In the TV show, he portrayed the character of a 35-year-old bachelor, David Bryan who decides to become a foster parent to two kids. After airing for a year, The Sinbad Show was canceled in April 1994.

Sinbad performed his first-ever stand-up comedy special in 1990 for HBO. The stand-up special was titled Sinbad: Brain Damaged. Then, he performed his next stand-up, Sinbad: Afros and Bellbottoms in 1993. In 1989, he started hosting the variety show, It’s Showtime at the Apollo 1989. He hosted the show until 1991 and returned as a host in 2005 while the regular host was on maternity leave.

Sinbad has also appeared in numerous movies. His notable movie role came in the movies “First Kid” and “Jingle All the Way”. In 1996, he was appreciated for his role in the TV series, Happily Ever After Fairy Tales for Evey Child. He has also made a cameo appearance on the TV show, It’s Always Sunny in Philadelphia. Likewise, he has hosted the show, Thou Shalt Laugh 3. In March 2010, he made a debut on the reality game show, Celebrity Apprentice. In 2021, he gave his voice to Disney Junior’s The Lion Guard character, Uroho the baboon for two episodes.

Sinbad is married to a lady named Meredith Fuller. He tied the knot with Meredith in 1985. The pair separated by divorce in 1992 However, they remarried in 2002. The couple shares two kids together. On October 25, 2020, he suffered a massive stroke, due to which, he was in intense therapy. Sinbad’s family has set up a website, The Journey Forward that details his journey from having a stroke to his recovery in length.

According to the website, he suffered an ischemic stroke on October 25, 2020, as a result of a blood clot. After that, he was rushed to West Hills Medical Center. Sinbad was able to talk and move with some weakness after doctors performed surgery and restore normal blood flow to his brain. However, the very next day, the doctors had to repeat the surgery to remove another blood clot. On November 21, 2022, his family released a statement and stated that he is learning to walk again after two years.

Sinbad’s net worth is estimated to be around $100 thousand as of 2022. The standup comedian battled with various tax issues with the IRS for nearly a decade. Sinbad was also forced to file for Chapter 13 bankruptcy in May 2013. He also submitted a filing where he claimed he had $10.99 million in debt and just $131,000 in assets. According to reports, he owed $8.3 million to the IRS and $2.3 million to the state of Carolina.

Greg Grippo Net Worth: How Rich is ‘The Bachelorette’ Star?

Savannah Chrisley Net Worth: How Rich is the TV Star Actually?