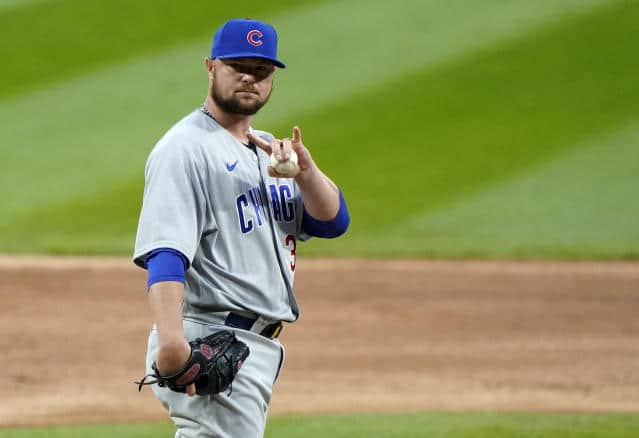 Jonathan Tyler Lester, who is better known as Jon Lester is a retired American professional baseball pitcher. He is best known for playing in the Major League Baseball (MLF) for the professional baseball teams Boston Red Sox, Chicago Cubs, Oakland Athletics, St. Louis Cardinals, and Washington Nationals. He is a 3 time World Series Champion who helped the Red Sox to win the final game of the 2007 World Series. As of 2022, Jon Lester net worth is estimated to be around $50 million.

Jon’s full name is Jonathan Tyler Lester and was born in Tacoma, Washington on the 7th of January, 1984. He spent his childhood days growing up in Puyallup, Washington where he attended All Saints School. Jon later joined the Bellarmine Preparatory School, where he showed his masterclass skill as a baseball pitcher. In his school year, he has been a 3-time All-Area Selection and a 3 time MVP.

Lester’s professional career began when he was picked up in the second round of the 2002 Major League Baseball draft by the Red Sox. He quickly made himself into a special place in the Red Sox team after getting a league-best 163 strikeouts against Portland Sea Dogs in the 2005 Class AA Eastern League. He was also named the Red Sox Minor League Pitcher of the year. At the end of the year, he was included in the Topps Class AA All-Star squad.

Jon made a major league debut for Red Sox on June 10, 2006, against the Texas Rangers, where he made a 4.76 ERA and put a 7-2 record victory. In August 2006, he was sent to a 15-day disabled list after suffering from a sore back problem, which might be the result of a car crash he had before that month. Later, it was known that he was diagnosed with enlarged lymph nodes on August 31. He got rid of the disease by getting full off-season treatment at Fred Hutchinson Cancer Research Center in December 2006.

You May Also Like:   Lydia Jacoby Net Worth: Height, Age, Bio, Career & More

Lester returned to the Red Sox in the midway of the 2007 season, where he started playing in the Class A Greenville Drive. On July 23, he made his first start of the year 2007 against the Cleveland Indians, where he helped his team pick the winner. Lester pitched 5⅔ shoutout innings and helped Sox to get the victory in the 2007 World Series. Lester signed a five-year contract extension with Sox worth $30 million on March 8, 2009. However, he was not in the best form at the start of the season as his team lost in the first two starting games.

Lester played with the Sox till 2014. In the last season for Sox, he made a career-high 15 strikeouts. He was traded to the Oakland Athletics on July 31, 2014. On August 2, he was able to make a debut start against the Kansas City Royals with a 2.35 ERA. In December 2014, he was signed to the Chicago Cubs for a six-year contract deal worth $155 million. He played his first game for the Clubs against the St. Louis Cardinals on April 5, 2015. In 2017, he helped the Cubs to register a win at the World Series, which was the first World Series win for Cubs since 1945.

Lester struggle to find his form with Cubs in 2020, which was also his worst season for Cubs. In the 2020 season, he played with a 5.16 ERA and recorded 42 strikeouts. After the end of the season, he became a free agent. In January 2021, he signed a year contract worth $5 million with the Washington Nationals. However, he was traded to the St. Louis Cardinals on July 30, 2021. While playing for the Cardinals, he registered his 200th career victory against the Milwaukee Brewers on September 20, 2021. Following the season, he became a free agent and announced his retirement on January 12, 2022.

You May Also Like:   Ron Duguay Net Worth: How Rich is Ron Duguay Actually?

Jon Lester has been married to his wife, Farrah Stone Johnson since January 9, 2009. He met her first time in 2007 during the rehab starts in Single-A Greenville. The couple shares 2 sons and a daughter together.

Lester has established a fundraising campaign called NVRQ alongside his wife, Farrah to provide support for the children who are diagnosed with cancer. In addition to that, he has been providing support to the Hutchinson Cancer Research Canter through the Longball Cellars brand that he released in a partnership with Charity Wines in March 2011.

At the start of 2022, Jon Lester’s net worth is estimated to be around $50 million. He has made total career earnings of $192,457,959 from his professional baseball career. Jon signed a whopping six-year contract deal worth $155 million with the Chicago Cubs in 2014.

Jay Barker Net Worth: How Rich is the Retired NFL Player Actually?

Clinton Portis Net Worth: How Rich is the former NFL Player Actually?