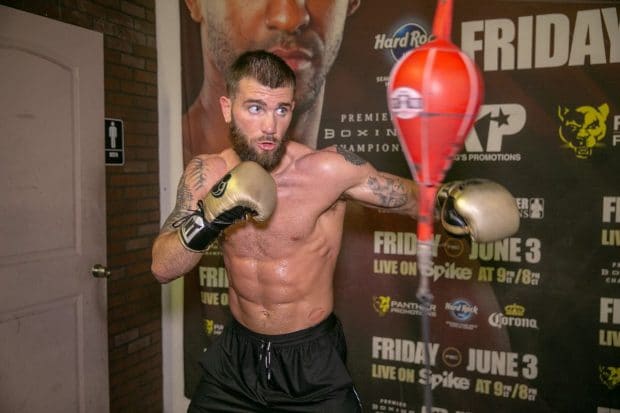 Caleb Plant is a 30 years old American professional boxer. He has been holding the IBF super-middleweight title since 2019. Caleb won his first professional fight in just 47 seconds in a first-round knockout. As of 2022, Caleb Plant net worth is estimated to be around $3 million.

Caleb Plant had a serious cut under his right eye after a recent brawl with Canelo Alvarez during a press conference on September 21, 2021. Plant and Alvarez came face to face to promote their upcoming fight on November 6, 2021, for the undisputed super middleweight championship title.

Caleb Plant was born on the 8th of July, 1992 in Ashland City, Tennessee, United States. He was born to his parents, Richie and Beth Plant. His dad, Richie is a former kickboxer, who did odd jobs to support his family. Caleb lost his mother in March 2019, who was shot by police after she pulled a knife on a police officer. He has two sisters named Hannah, and Madeline Plant.

Plant started boxing when he was just 8. He competed at the 2011 Golden Gloves and came out as the winner in the light heavyweight division. He had an amazing career as an amateur boxer as he holds a record of 97 wins with just 20 defeats.

You May Also Like:   Mikey Williams Height, Age, Wiki, Net Worth & Girlfriend

Plant defeated Juan De Angel on 23rd August 2016, which went for the 10th round. It was his first boxing fight which took that long time. He had his first Showtime Championship Boxing match against Andrew Hernandez. In the boxing match, he completely dominated Hernandez by winning every single round of the fight.

Caleb defeated the reigning IBF super-middleweight champion, Jose Uzcategui on 13th January 2019. He won the fight by the unanimous decision. Then, he defended his IBF title against Mike Lee, who was a +1119 underdog. He made a technical knockout victory against Lee after completely dominating over him in every round.

Plant defended his IBF title for the second time against Vincent Feigenbutz on February 15, 2020. He completely dominated Feigenbutz in all ten rounds, and in the end, he retained his title by winning through a technical knockout. Later, he defended his title for the third time against Caleb Traux. Plant and Traux fought till the 12 round, and after the end of the scheduled 12th round, Plant was made the winner by unanimous decision.

Plant and Alvarez recently came face to face to promote their upcoming fight. However, the promotional event later turned into an ugly brawl where Alvarez punched into Caleb’s neck due to which he had a cut under his right eye. As per the reports, Plant said something bad about his mother and even called him a drug cheat, which made Alvarez aggressive during the promotional event.

Caleb Plant is married to a Fox Sports broadcaster, Jordan Hardy. He met her first time in 2016 and made a public proposal to her in February 2019. He proposed to Jordan after winning the IBF World Title against Jose Uzcategui. Plant and Jordan exchanged their wedding vows in November 2019.

Prior to getting married to Jordan Hardy, he was in a relationship with Carman Jean Briscoe-Lee. Caleb and his former girlfriend, Carman also had a baby daughter in January 2015, who was named Alia Plant. However, his daughter died after 19 months due to a respiratory infection that later turned into pneumonia.

As of 2022, Caleb Plant’s personal wealth is estimated to be around $3 million. He has gathered the vast chunk of money from his professional boxing career. Caleb made a $750,000 purse in a fight against Caleb Truax on January 30, 2021.

Evander Kane Net Worth: How Rich is the Ice Hockey Player Actually?