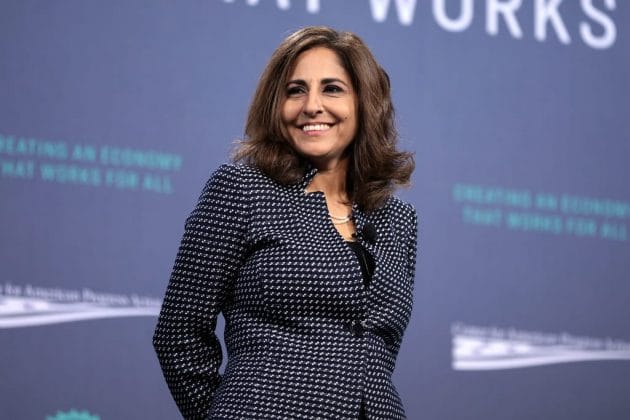 Neera Tanden is an American political consultant who is serving as the President of Center for American Progress (CAP). Tanden is also a former government official. She has served on different Democratic presidential campaigns. Some of the campaigns include Michael Dukakis, Bill Clinton, and Barack Obama. According to her recent financial disclosure, Neera Tanden net worth is estimated to be around $1.5 million.

51 years old, Neera Tanden was born on 10th September 1970 in Bedford, Massachusetts. Neera has an Indian root as her parents were Indian immigrants. She didn’t get both her parent’s love during her childhood. When she was 5, her parents separated. Tanden’s mother faced great difficulty raising two kids. Tanden has a sibling, Raj.

As far as her educational background, Neera studied at the University of California, holding a Bachelor of Arts Degree in 1992. Four years later in 1996, she came out as a Juris Doctor from Yale Law School.

In her starting days, she has worked for different Democratic presidential campaigns. She has also worked on senatorial campaigns. Neera is a close friend of Hillary Clinton. That’s why she is considered a loyal character for the Clintons. She has even worked on the new energy policies under President Bill Clinton’s campaign.

You May Also Like:   Patrick Leahy Net Worth: How Rich is the Senator from Vermont?

In 1999, Neera was hired as Hillary Clinton’s polity director and deputy campaign manager. After Hillary’s victory as Senator, she served as legislative director for two years from 2003 to 2005. In 2008, she became a part of the team that worked on the Democratic Presidential Campaign of Barack Obama.

Neera also had a major role in founding the organization, Central for American Progress (CAP) in 2003. She served as Senior Vice President for Academic Affairs and Domestic policy for the organization. She later worked as Chief Operating Officer in 2010. A year later, in 2011 Tanden was appointed as new President of CAP.

She recently came into the news for her tweets which were targeted at Republic Senators. However, she deleted most of her tweets after President-elect Joe Biden made an announcement of Tanden’s nomination for Director of Office of Management and Budget. She even changed her Twitter bio from progressive to liberal after the nomination. However, a political journalism company Politico stated the nomination act as the equivalent of rubbing salt to wound.

Tanden has also received few honors. National Journal named her as 25 Most Influential Women In Washington in 2012. Similarly, she was listed in the ten most powerful women by Elle in 2014.

Neera Tanden is married to Benjamin Edwards. She met Edwards while studying at the University of California. In 1989, the couple got engaged and shared the wedding vows in 1999. Their wedding party was conducted at White House’s East Wing’s Yellow Oval Room. Tanden has two kids; a daughter born Ilina born in 2002 and a son Jaden born in 2005.

At the start of 2022, Neera Tanden’s personal wealth is estimated to be around $1.5 million. Tanden has been collecting a vast amount of money playing her role in different successful and unsuccessful presidential campaigns. If she is confirmed for the new role as director of the Office of Management and Budget, she will receive more than $150,000 per year as a salary.

Condoleezza Rice Net Worth: How Rich Is the Diplomat in 2022?