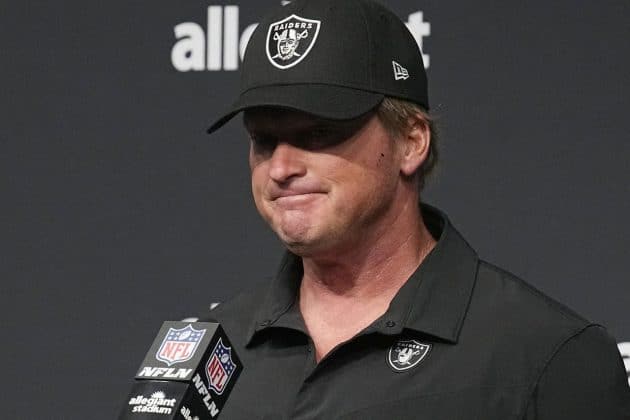 Jon Gruden is a 58 years old American football coach. He is best known as the former head coach of the professional football team, Oakland Raiders. Gruden stepped down as the head coach of Raiders on Monday, October 11, 2021, due to the revelation of controversial emails. As of 2022, Jon Gruden net worth is estimated up to be around $30 million.

Jon Gruden was born on the 17th of August, 1963 in Sandusky, Ohio, United States. He grew up as a fan of the Cleveland Browns. His father, Jim Gruden was also associated with football. Jim has worked as a professional football regional scout, director of player personnel, and quarterbacks coach for the Tampa Bay Buccaneers. He has two brothers. One of his brothers named Jay has played and served as a coach in the Arena Football League.

Soon after graduation, he was appointed as a graduate assistant coach at the University of Tennessee. Later on, he expanded his work experience by serving as a quarterbacks coach at the Southeast Missouri State. In 1989, he joined the University of the Pacific as an offensive assistant. Jon then served as a special assistant for the under quarterbacks coach of San Francisco 49ers, Mike Holmgren.

You May Also Like:   Jon Lester Net Worth: How Rich is the Retired Baseball Pitcher?

In January 1992, he was appointed as the special offensive assistant/wide receivers coach for the Green Bay Packers. He was with the Packers for three seasons, and then, he joined the Philadelphia Eagles as the offensive coordinator. After some time, he was chosen as the new head coach of the Oakland Raiders for the 1998 season.

In 2002, he replaced Tony Dungy and became a new head coach of the Tampa Bay Buccaneers. He reportedly signed a 5-year contract with the Tampa Buccaneers worth $17.5 million. In May 2010, he started working as a volunteer assistant offensive line coach at the Carrollwood Day School. In January 2018, he came back as a head coach of the Oakland Raiders. He was signed for a 10 years worth $10 million contract by the Raiders. It was one of the biggest contracts in the league’s history.

On October 11, 2021, Gruden resigned as the head coach of the Raiders after the controversial emails were released by The New York Times. As per the league investigation in 2021, he has used racist, homophobic, and misogynistic language in the emails. In the email, Gruden has referred to NFL commissioner, Roger Goodell as a clueless anti-football pu*** and fa**ot.

Likewise, he alleged the current U. S. President, Joe Biden as a nervous clueless pussy. On Monday night just after few hours of the report of The New York Times was released, he resigned from his post. He also released a statement where he said “I have resigned as Head Coach of the Las Vegas Raiders. I love the Raiders and do not want to be a distraction. Thank you to all players, coaches, staff, and fans of Raider Nation. I’m sorry, I never meant to hurt anyone.”

Jon Gruden is a married man who tied the knot with a lady named Cindy Brooks in 1991. He met her first time in 1985 while he was serving as a graduate assistant at the University of Tennessee. His beloved wife, Cindy was then a student at the University. As of now, they share three sons together.