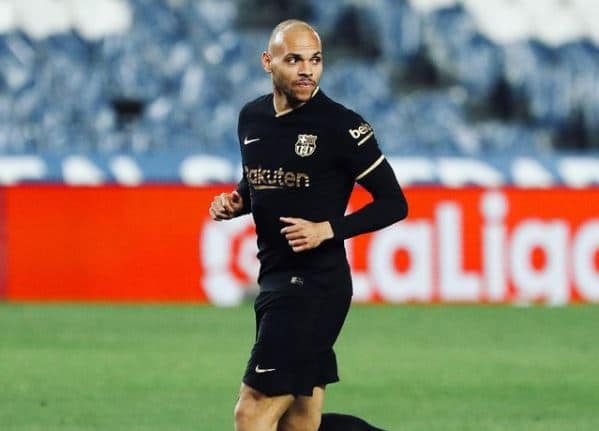 Martin Christensen Braithwaite is a Danish professional footballer who plays for Barcelona. He also played an instrumental role in helping Denmark reach the semi-finals of Euro 2020. As of 2022, Martin Braithwaite net worth is estimated to be over $55 million.

Martin Braithwaite was born on June 5, 1991, in Esbjerg, Denmark. He joined an academy called Sædding-Guldager Idrætsforening as a young kid where the seeds were set for his football career. He would soon sign to the club called Esbjerg with whom he signed a 3-year deal in 2007.

Martin Braithwaite Net Worth and Career

Martin would make his official debut for Esbjerg in 2009. His performances gradually improved over the years that led to his team even winning the 2012-13 Danish cup. This led to him being called up by the Danish national team in 2013 as well which was an important step in his professional career.

Among his career stints, he had a great stint at Middlesbrough whom he joined in 2017. Back then, Middlesbrough was playing in the EFL Championship with Martin being bought for £9 million. Yet, in between his time there, he also had a stint at Bordeaux on a loan deal. But, in 2020, his career would take a new direction with Barcelona signing him for a deal worth €18 million because of a long-term injury sustained to one of Barcelona’s key players.

Martin has gone on to play regularly for Barcelona competing more than 50 times already and scoring a good chunk of goals. At the same time, he has also been an active investor who has made a big fortune through his investing activities by partnering up with his uncle Philip Michael who is a well-known entrepreneur and real estate developer who has even authored a book on real estate.

Martin’s wife’s name is Anne-Laure Louis Braithwaite who is an entrepreneur and a television personality. They have two sons together. Furthermore, their family also includes the two children from Anne’s previous relationship.

As of 2022, Martin Braithwaite’s net worth is estimated to be over $55 million. Though Braithwaite earns great through his current contract with Barcelona that pays $85,000 per week, a big part of his net worth can be attributed to the investment he made back in 2017 in the innovative real estate business of his uncle. He has mentioned that he initially invested $850,000 which grew fourfold within the first year. As of 2021, the same business is reportedly worth $250 million with their goal of reaching a $1 billion valuation in the coming years.

Furthermore, the clothing business with his wife has also paid handsome dividends which are currently running with the brand name called Trente. Braithwaite seems to love investing as he even has a restaurant in Barcelona called Gave. Braithwaite has clearly reached a state of financial freedom and the real estate project he is involved in now has the goal of creating many millionaires in the black community in America.

Jason Kokrak Net Worth: How Rich is the Golfer Actually in 2022?

Richard Sherman Net Worth: How Rich is the NFL Player Actually?