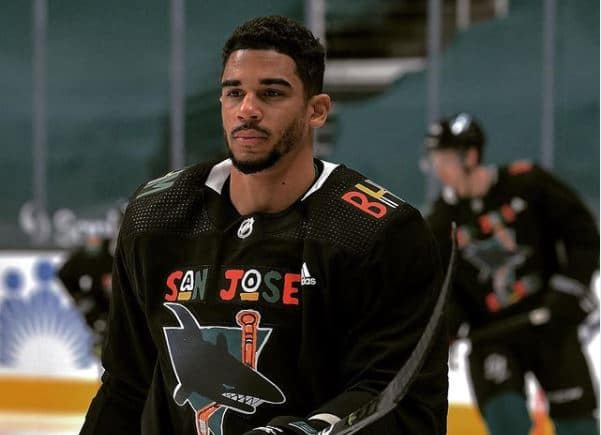 Evander Frank Kane is a Canadian professional ice hockey player who plays for the San Jose Sharks of the National Hockey League(NHL). He has been part of Team Canada which won gold during the 2008 Ivan Hlinka Memorial Tournament. As of 2022, Evander Kane net worth is estimated to be around $5 million.

Kane’s father was an amateur boxer and hockey player while his mother was also active in sports as a volleyball player. This had a huge influence on Kane growing up to be involved in sports himself.

He studied at the John Oliver Secondary were played different sport including baseball, soccer, and basketball. He would start to be involved in playing ice hockey when he was eight years old. By the time, he got into his teenage years, Kane was already playing for different tournaments including playing for the North Shore Winter Club.

Evander Kane Net Worth and Career

In 2006, Kane would be drafted as the 19th overall during the WHL Bantam Draft to the Vancouver Giants. He started to gain regular playing time in 2007 and was also part of the 2007 Memorial Cup championship. However, in the next season, Kane had some issues with a diagnosis of mononucleosis. Kane recovered himself and started to perform consistently again. He would even be nominated for the Jim Piggott Memorial Trophy that year for WHL rookie of the year award.

Kane had an excellent season in 2009 by managing to come fourth in League scoring that year. That same year, he got his first professional contract after being drafted to the Atlanta Thrashers.

Over the years, Kane started to perform better and better but injuries did hurt his momentum as he faced several injuries including a left knee injury as well as an arm injury. Yet, he had proven himself as a valuable asset for the team and in 2012 would agree to a six-year contract which was worth $31.5 million.

Kane is married to Anna Kane. They have a daughter together named Kensington. Though they are still married, it is unclear whether their relationship is in a healthy state as it seems that they are not affectionate anymore. Kane has been subject to several controversies over the years. He was sued in 2016 by a woman who alleged that he assaulted her.

As of 2022, Evander Kane has an estimated net worth of $5 million. By looking at Kane’s previous contract with the Jets which was valued at $31.5 million, Kane did not look after his finances well because of which he filed for chapter 7 bankruptcy for amassing a debt of $26.8 million.

Devin Booker Net Worth: How Rich is the NBA Player Actually?

Caleb Plant Net Worth: How Rich is the Boxer Actually in 2022?