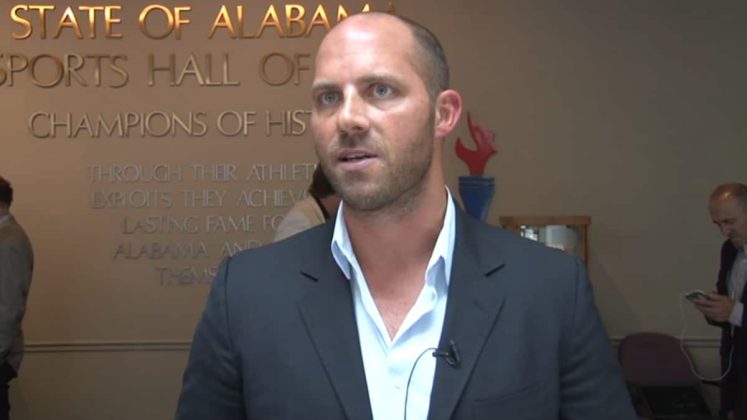 Jay Barker is a former American football Quarterback, who was drafted by the Green Bay Packers in the 1995 NFL Draft. Barker is currently working as an analyst on ESPN Radio. He also co-hosts the talk radio program called “The Jay Barker Show”. As of 2022, Jay Barker net worth is estimated to be around $7 million.

Barker was born on July 20, 1972, in Birmingham, Alabama . He studied at the Hewitt-Trussville High School. Jay started playing football while studying at high school. He completed his high school graduation in 1990.

Jay continued to play football when he joined the University of Alabama. There, he played college football under the University’s head coach, Gene Stallings. With his brilliant game in the 1992 season, he helped his team to get a victory in the national championship against the No. 1 team Miami Hurricanes.

Barker likewise led Alabama’s Crimson Tide as their starting quarterback and helped them to register a victory in the 1993 season games.

Barker won the Johnny Unitas Golden Arm Award in the 1994 season and was placed fifth in the voting of the Heisman Trophy. No one was close to his record of the most victories for a college quarterback in the NCAA. However, due to his later forfeiture of games in the 1993 season, the NCAA official record book reflects the score 27-11. He began his professional career after he was selected by the Green Bay Packers in the 1995 NFL Draft.

You May Also Like:   Top 20 Richest Race Drivers Ranked by Their Net Worth 2022

Despite the selection in the NFL Draft, he could make a place in the Packers team. Then, he joined the professional teams the New England Patriots, and the Carolina Panthers. However, he never appeared in a regular-season game. In 1998, he was signed by the professional football team, the Toronto Argonauts to the Canadian Football League. He played for three seasons with the Argonauts and then started playing in the XFL for the Birmingham Thunderbolts.

Barker played as a Thunderbolts’ second-string quarterback and appeared in several games for the team in the middle of the season. However, his form in XFL games was not best enough that would help him to continue his football career. He in fact lost the seven-game in the beginning while playing in the XLL.

After he retired from football, he started working as an analyst for ESPN Radio. Previously he served as an on-air personality for Birmingham-based radio station, WJOX. In the radio station, he hosted the radio program called Opening Drive along with Tony Kurre.

Jay Barker has been married twice. First, he tied the knot with a lady named Amy DiGiovanna in 1995. His first marriage lasted for 12 years until he separated from Amy through a divorce in 2007. Jay shares four kids with his ex-wife, Amy. In 2008, he walked through the aisle again with the country musician, Sara Evans. As per the reports, Barker and Evans have separated, and are not living together. They were living together in Mountain Brook, Alabama with their seven kids; 4 from Barker’s previous marriage and 3 from Evans’ previous marriage.

You May Also Like:   Sharrieff Shah Net Worth: How Rich is Jen Shah's Husband?

Barker was recently arrested on a domestic violence charge when he tried to hit his wife, Evans, and another person who was with Evans in a car on Saturday, January 15. He was subsequently charged with aggravated assault with a deadly weapon due to which he was placed on a 12-hour hold in Davidson County prison. However, he was released the same night at 7:30 after posting a $10,000 bond.

According to sources, Evans was returning back to her house seating in the passenger seat of her friend’s vehicle after attending a party at her neighbor’s home. When she was in the car, Barker attempted to hit the car at a high speed, but he missed. After then, Evans drove away from Barker’s car and called the police. Barker would be appearing in court in March 2022.

As of 2022, Jay Barker’s net worth is estimated to be around $7 million. He must have earned a huge amount from his professional football career and through serving as a radio show host.

Malik McDowell Net Worth: How Rich is the NFL Player Actually in 2022?

Jon Lester Net Worth: How Rich is the Retired Baseball Pitcher?