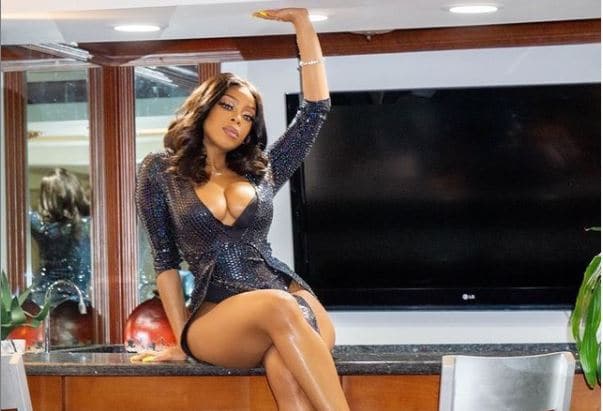 Shay Johnson is an American reality TV star. She is best known for appearing on VH1’s reality series “Love & Hip Hop: Atlanta”. Shay is also known for her appearance on VH1’s hit series “Flavor of Love”. She was given the nickname Buckeey while appearing on the dating game show, Flavor of Love and Charm Love. As of 2022, Shay Johnson net worth is estimated to be around $600 thousand.

Shay Johnson was born on 30th September 1983 in Atlanta, Georgia, United States. She belongs to the Afro-American ethnicity. Shay has not shared enough information regarding her early life, parents, and educational background. She has two siblings; a brother and a sister.

Shay has appeared in the second season of VH1’s reality TV series “Flavor of Love”. The reality series started premiering on August 6 and ended on 29 October 2006. She finished at 5th place in the reality series. After earning early recognition, she started appearing as a music video model, where she appeared alongside rappers TI, Cee-Lo, Fabolous, Young Dro, Jazze Pha, Shawty Lo, and many more.

Likewise, she has been featured on the cover of several men’s magazines like Giant, King, and BlackMen’s Magazine. In early 2007 and 2009, she was featured in Smooth Magazine. She has also appeared in Hair publications Sophisticates Black Hair and Metro Style Hair Magazine.

Later on, Shay made several guest appearances on various TV series and music videos. Likewise, she has shown up on several radio shows like “Frank and Wanda in the Morning”. In 2007, she returned to VH1 to make an appearance on the reality series “Charm School”. It was a spin-off of the reality show “Flavor of Love”.

Shay became popular after she appeared as a supporting cast member on the first two seasons of the popular reality series “Love & Hip Hop: Atlanta”. She grabbed the major attention from audiences after she became close with rapper, Lil Scrappy. However, both denied being in a relationship and claimed their growing romance as anything more than casual sex. Later, she was dumped by Scrappy to start a serious relationship with Erica Dixon.

Shay was a part of the third season of Love & Hip Hop: Atlanta, however, she was removed from the show after she smashed a bottle on a women’s face in a nightclub brawl. Soon, after the feud, she was removed from the show. In 2018, she appeared as a main cast member on the first season of Love & Hip Hop: Miami. In the series, she had a violent feud with Gabby, and Chinese Kitty.

Johnson further involved in a violent feud with Jojo during the second season of Love & Hip Hop: Miami. Likewise, she also went through a serious medical issue in the second season due to which, she struggled in the show.

Shay Johnson was dating the rapper, Lil Scrappy from 2010 to 2013. They dated for over 2 years before separating in 2013. Likewise, she was in a long-distance relationship with the Miami rapper, Pleasure Up. She even relocated to Miami to meet Pleasure P, and both appeared in the reality series Love & Hip Hop: Miami. Their relation fall apart during the second season.

You May Also Like:   Jeff Probst Net Worth: How Rich is the Survivor Host Actually in 2022?

As of 2022, Shay Johnson has gathered a total net worth value of $600 thousand. She has earned all the money through her appearance on many reality series. Shay must have gained a big amount from appearing on Love & Hip Hop, however, her exact earning detail from the show has not come out yet.

Jennie Nguyen Net Worth: How Rich is the RHOSLC Star Actually?