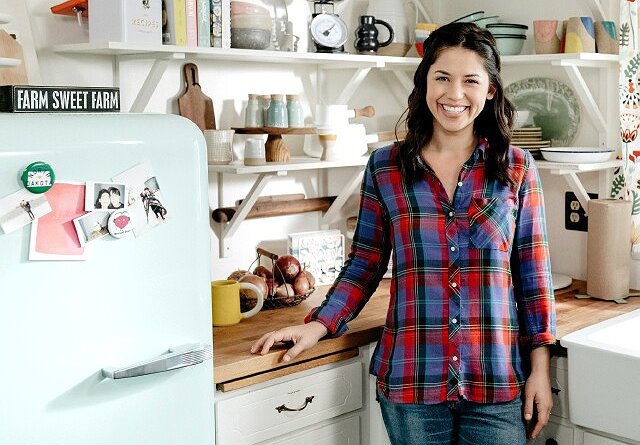 Molly Yeh is an American chef, blogger, and cookbook author. As of 2022, Molly Yeh net worth is estimated to be $9 million.

Molly was born on May 22, 1988, in Glenview, Illinois to John Bruce Yeh and Jody Yeh. Her parents were both musicians in their early days and played clarinet. Her father also serves as the director and founder of Chicago Pro Musica. Molly was raised alongside her older sister named Jenna.

Regarding her education, she went to Juilliard for percussion. She then went to Glenbrook South High School followed by Midwest Young Artists Conservatory where she was a member of two percussion ensembles.

Molly Yeh Net Worth and Career

From an early age, Molly had an interest in food and cooking. While she was in New York, she created her own lifestyle blog named “mynameisyeh.com”. She created her blog in 2009 while she was on vacation but took it more seriously when she moved with her husband in 2013. She then realized that blogging could be a part of her career.

Her blog is very popular and receives millions of hits a month. It was recognized by Saveur and Yahoo as “Food Blog of the Year”. Her content on the blog has been featured in several media publications like The New York Times, New York Magazine, Bon Appetit, Food & Wine. She also contributes sometimes to Vanity Fair, Saveur, Food52, and Conde Nast Traveler.

As a cookbook author, she published her first book titled “Molly on the Range: Recipes and Stories from An Unlikely Life on a Farm” in 2016. She won the Judges’ Choice IACP Cookbook Award in 2017. The book was also cited by The New York Times as one of the fall’s top releases of 2016.

Molly is now the host of the Food Network’s series “Girl Meets Farm”.

Antonia Lofaso Net Worth: How Rich is the Chef Actually in 2021?

Molly has been married to Nick Hagen since 2014. They met for the first time while they were at Julliard School. Molly and Nick dated for one year and decided to move together to her beau’s family farm in North Dakota in 2013. A year later, they tied the knot.

As of 2022, Molly Yeh net worth is estimated to be $9 million. She earns money from her own blog and also appearing on the television show “Girl Meets Farm”. It is reported that she earns an average of $57,000 per year for appearing on the show.

You May Also Like:   Erika Jayne Net Worth: How Rich is the TV Star Actually in 2022?

Her other source of income is from a cookbook. She is also popular on Instagram where she is seen endorsing several cooking brands and products. As of 2022, her Instagram account has massive 778K followers.

Shay Johnson Net Worth: How Rich is the Love & Hip Hop Star?