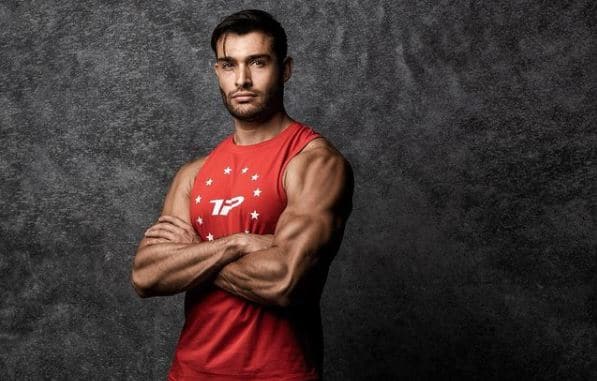 Sam Asghari is an American model, actor, and fitness trainer. He is best known for being the boyfriend of famous American pop star, Britney Spears. During a recent conservatorship hearing on June 23, 2021, Britney said, she is now ready to start a family with him. As of 2022, Sam Asghari net worth is estimated to be around $2 million.

Sam Asghari was born on 3rd March 1994 in Tehran, Iran. He grew up in Iran along with his mother, Fatima, and three sisters, Maddy, Faye, and Ellie. When he reached 12, he shifted his place to Los Angeles to unite with his father, who was living in the United States for a decade. His father was working as a tow truck driver in U. S.

Sam has been more interested in sports since his childhood days. In fact, while growing up in Iran, he played soccer and had a dream of making a career in sports. He also had a dream of having a job in law enforcement. When he moved to the United States, he joined the football team in high school.

Regarding his education, Sam has studied first at the University of Nebraska and then studied at Los Angeles’ Moorpark College. Later, he turned his path from sports and joined Pierce College to study criminal justice.

Asghari later started working as a personal trainer. He eventually chose to become a personal trainer after losing 100 pounds. Sam has been sharing his passion for fitness on Instagram. He even posts sexy workout snap videos on his Instagram. Sam has also been helping his clients to get in great shape by providing them custom meal plans.

Sam was introduced to the modeling world through his fitness journey. He has even appeared as a model in Fifth Harmony’s 2016 video “Work From Home”. Sam later got to work for Spear’s video “Slumber Party”, where he appeared as her boyfriend.

Sam has also been impressive as an actor. He has worked in Showtime’s dark comedy series “Black Monday”. Likewise, he has appeared in two other hit series “Hacks”, and “The Family Business”.

Sam and Britney Spears’ love story started when he was hired as her love interest in her 2016 music video “Slumber Party”. The pair soon started the conversation, which ended up in exchanging phone numbers. In a short time, both went on a date. A few months later, they were spotted together on New Year’s Eve, which made it clear that both are sharing a strong love connection.

Sam and Britney are often seen traveling outside U. S. for a vacation together. Their most frequent travel destination is Hawaii. Most recently, they were captured together having a blissful moment in Miami.

You May Also Like:   Zach Avery Net Worth: How Rich is the Actor Actually in 2022?

Sam has been staying quiet regarding his lady love, Spears’ conservatorship. But, after a long time, he broke his silence after the documentary “Framing Britney Spears” got out, which was made focusing on the #FreeBritney movement.

Sam doesn’t seem happy with Spears’ dad. In February 2021, he posted an Instagram story, where he wrote “In my opinion, Jamie Spears is a total d–k.”. Britney has recently appeared at the hearing of her conservatorship on June 23, 2021, where she said she wants to start a new family with her beau, Sam Asghari.

Sam has always been supporting Britney since they met in 2016.  He even supported Britney just before the hearing by wearing a #FreeBritney T-shirt.

As of 2022, Sam Asghari’s personal wealth is estimated to be around $2 million. He has been able to gather a handsome figure from working as a model, actor, and fitness trainer. On the other hand, his girlfriend Britney Spears’ has an estimated net worth of $70 million.

Brad James Net Worth: How Rich is the Actor Actually in 2022?

Tommy Kirk Net Worth: How Rich was the Actor Actually in 2022?