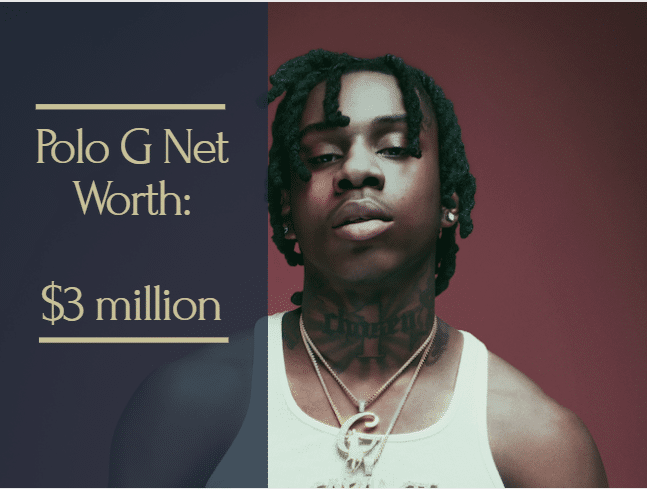 Polo G is an American rapper, singer, and songwriter best recognized for his singles “Finer Things” and “Fall Out”. As of 2022, Polo G net worth is estimated to be $8 million dollars.

Polo G just turned 22 years old on January 6. He was born in the year 1999 in Chicago, Illinois, United States. His real name is Taurus Tremani Bartlett and has three siblings, a brother, and two sisters.

Polo has mentioned he had survived a violent childhood life growing up in Chicago. He also stated that he had to quickly mature in his life as he was growing up in the trenches. Polo nearly died in 2019, because of an overdose at the club. Since then, he has stopped taking Xanax and ecstasy. From the sources, it is revealed that he has a kid named Tremani.

Polo G is mostly noted for his vivid and explicit storytelling style. His lyrics resemble the story of racism and mental health. He is highly influenced by Lil Wayne and Tupac Shakur.

Polo started his music career by releasing a song titled “ODA”. In 2018, he opened an account in SoundCloud releasing a single Gang With Me. The song instantly gained millions of plays. After getting early attention, he released the other two singles Welcome Back and Neva Cared. Though he gained wide popularity after he released a single titled “Finer Things”. That song gained him huge popularity gaining millions of views.

You May Also Like:   Vince Staples Net Worth: How Rich is the Rapper in 2022?

After a few successful singles, he released another single titled “Pop Out’ featuring the rapper Lil Tjay. Pop reached the top soon after the single in 2019. The song became a massive hit peaking the number 11 spot on the list of Billboard Hot 100. More than 200 million views was recorded of his song on Youtube. The song made him sign a recording contract deal with Columbia Records.

That same year, he released videos of his other singles from his first studio album titled “Die a Legend”. The other singles like Deep Wounds, Effortless, Through Da Storm, and Dyin Breed became very popular as his early singles.

Pop’s success journey continued in 2020 as well. His single titled “Go Stupid” was listed at the 60th spot on Billboard Hot 100. That was his second song listed on the record chart.  On May 15, 2020, Pop released a second studio album titled “The Goat”. The album became more popular than his first album. It peaked at 2nd spot on Billboard 200. In fact, ten of the songs from the album were listed on Hot 100.

Besides his own creation, he also got featured on the Juice Wrld’s single titled “Hate the Other Side”. Polo’s recent hit songs include “Martin & Gina” and “Epidemic”. He was recently featured on rapper King Von’s single “The Code’.

On March 19, 2020, he collaborated with Lil Tjay and Fivio Foreign on the song “Headshot”. He then released the next track “Rapster” which debuted at number one on the Billboard Hot 100.

As of 2022, Polo G’s personal fortune is estimated to be around $8 million. Talented gem of the music world, Polo G has just taken few steps in the music industry and he has already become the most loved rapper. He is sure to achieve more success in the next few years. Till now, as the record states, Polo G has accumulated a total personal fortune of around $3 million dollars.

Yung Bleu Net Worth: How Rich is the Rapper Actually in 2022?

Chico Bean Net Worth: How Rich is Wild ‘N Out Star Actually?