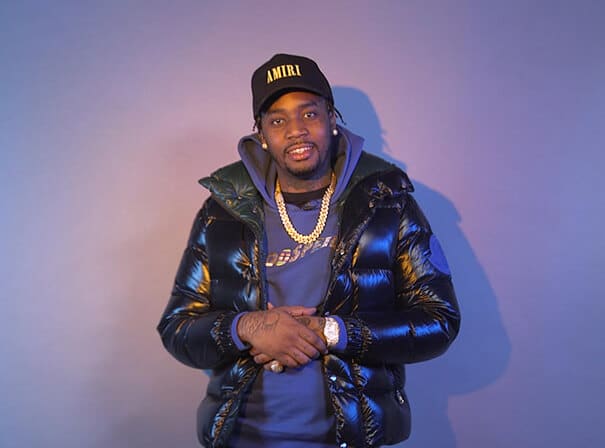 Fivio Foreign is a renowned American rapper. He is best perceived in the music business for his 2019 hit single “Big Drip”. Fivio is currently signed to Columbia Records and Mase’s RichFish Records. As of 2022, Fivio Foreign net worth is estimated to be around $2 million.

Fivio Foreign was born Maxie Lee Ryles III on March 29, 1990, in New York City, United States. He has not shared much information about his early life and education detail. Fivio lost his mother in 2018 after she suffered from a stroke.

Fivio Foreign Net Worth and Career

He started off his career by releasing songs on streaming platforms Spotify and Soundcloud. In 2011, he entered the music field with the stage name, Lite Fivio.  Later, in 2013 he came with a stage name Fivio Foreign. Soon after some time, he formed a musical group with his friends named 800 Foreign Side.

Though he was working hard to gain popularity like other famous rappers, he was not able to get the right track. In 2019, his dream turned out into reality after he released the song “Big Drip”. The song received an overwhelming response from all music lovers. In fact, the official video of the song generated more than 62 million views on YouTube.

In June 2019, he released his first EP titled “Pain and Love”. His hit song, Big Drip was also included in it. The EP also includes other hit songs like “It’s Me”, “Pop Out” and “2 Cars”.

After earning a much-needed break, he worked on few collaboration songs with famous rappers like Mello major, Killa Cash, Abillyon, and Reemovanprez.

Fivio made his Rolling Loud Festival debut in October 2019, making a stage entry with Juice WRLD. In November 2019, he was signed to Columbia Records for one million dollars.

Foreign, later achieved more popularity after featuring on Drake’s song “Demons” and Lil Tjay’s song “Zoo York”. He became more popular in 2020, after giving hit songs “Spicy”, “K Lo K”, “That’s a Fact” and “I Am What I Am”.

Fivio Foreign is presently dating his longtime girlfriend, Jasmine Giselle. He even has a kid with her. In 2020, Fivio was arrested by a Bergen County official for assaulting his girlfriend who was pregnant at that time.

However, Fivio’s lady loves Jasmine came in his support and shared a story on her Instagram. Jasmine further clarified in her story that she didn’t call the cops.

Fivio Foreign has amassed an estimated fortune of $2 million by 2022. He has collected the amount all from his music career. As he is picking up more success now, his net worth would surely increase in the future.

You May Also Like:   Yungeen Ace Net Worth: How Rich is the Rapper Actually?

Loaded Lux Net Worth: How Rich is the Rapper Actually in 2022?