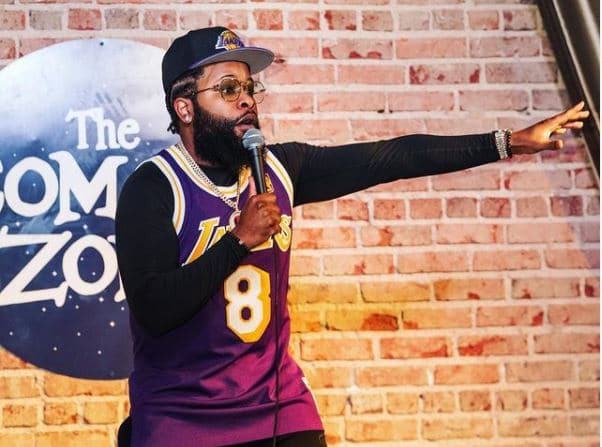 Chico Bean is a renowned American stand-up comedian, writer, and rapper. He is best perceived as a recurring cast member of MTV’s popular show “Wild ‘N Out”. He is also known for his appearance on other comedy shows “Guy Court”, “The Freestyle Funny Comedy Show” and “85 South Show”. As of 2022, Chico Bean net worth is estimated to be around $5 million.

Chico Bean was born Anthony Jamal Bean on February 20, 1987, in Washington, DC, United States. He has shared very less information on his early life. From sources, it is revealed that he lost his six family members in gun violence. Chico was just 2 years old when his father was shot with a gun on DC’s streets. He was named ‘Chico’ by his uncle.

Chico was made to be a comedian as he possesses a good sense of humor and has great comic timing. He started off his career as a comedian while staying in Greensboro, North Carolina. He had opened a few comedy shows earlier. Later, he founded the comedy show called “Freestyle Funny Comedy Show” along with B-Daht and Darren Brand.

Bean, along with two members used to perform a stand-up comedy act at various comedy clubs, universities, and colleges. After some time, he gave an audition for Nick Cannon’s “Fresh Faces of Comedy Stand-Up Show”.

During the audition, Nick noticed his comic talent. Although, he was not able to perform well in the audition. He was redoing his performance and just couldn’t deliver a perfect punch line. While he was trying, Nick stopped him in the middle and boosted his confidence saying he is a good comedian.

Chico actually auditioned for the show three times. Later he auditioned for the 5th season of MTV’s show “Wild ‘N Out”. Nick, who was already impressed eventually picked him for the show. Since then he has been one of the recurring cast members in the show, though initially he was selected for just 3 episodes.

In Season 7, Chico competed against the rapper Safaree in a Wildstyle battle. The battle was aired in the episode “T-Pain”, which was loved by the audience. Likewise, he became popular for Sucka MC Battles with another recurring cast member, Karlous Miller.

Besides appearing on Wild ‘N Out, he has worked on E! Network’s sketch comedy show called “The James Davis Project”. He was also the writer of the series.

Chico Bean is possibly single at present time. He has not revealed any information regarding his past love affairs. Despite his secret nature, it is revealed that he has a daughter named Pierce Chanel. He frequently shares a picture with daughter Pierce on Instagram. However, the name of his daughter’s mother has not come out yet.

Chico Bean has made many people laugh and helped them to get relief from their stressed life. MTV’s show Wild ‘N Out, has helped him to earn wide recognition. He must be getting a hefty amount from the show. Starting 2022, Chico Bean has amassed an estimated fortune of $5 million.

Polo G Net Worth: How Rich is the Rapper Actually in 2022?

RZA Net Worth: How Rich is the Rapper Actually in 2022?