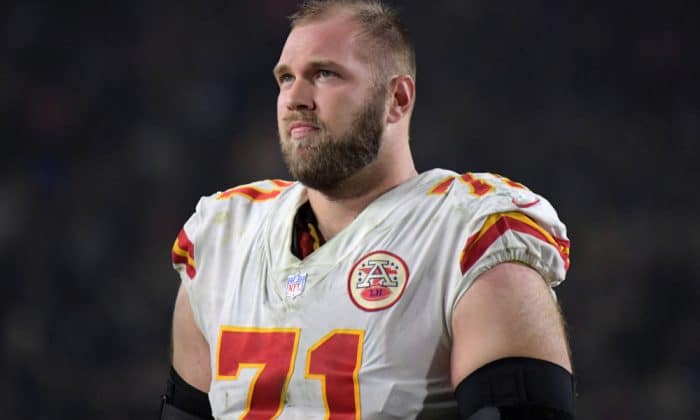 Mitchell Schwartz is an American football player who plays as an offensive tackle for the Kansas City Chiefs of the National Football League. As of 2022, Mitchell Schwartz net worth is estimated to be $20 million.

Schwartz was born on June 8, 1989, in Pacific Palisades, California. His father Lee Schwarz is a business consultant to manufacturing companies while his mother Olivia Goodkin is an attorney.

Schwartz didn’t have an interest in football until he was a freshman in high school. He played football at Palisades Charter High School. He was considered as a three-star recruit by Rivals.com. Schwartz received offers from Michigan, Stanford, Virginia, Oregon, and Washington State but decided to play for the University of California.

He played college football at the University of California, Berkeley from 2007 to 2011. He was redshirted in 2007 and in 2008, he started all 13 games and was named a second-team Freshman All-American by College Football News. From 2008 to 2011, he played all 51 games possible.

You May Also Like:   Ben Wallace Net Worth: How Rich is the former NBA Player Actually?

In 2012, Schwartz was drafted in the second round by the Cleveland Browns in the NFL Draft. He signed a four-year contract with the Browns worth $5.17 million. In his debut season for the Browns, he started all 16 games and was named to the Pro Football Focus 2012 All-Rookie Team.

Schwartz played with the Browns from 2012 to 2015 before he signed for the Kansas City Chiefs in 2016. He signed a five-year, $33 million contract with the Chiefs making him one of the highest-paid right tackles in the NFL. At the end of the 2016 season, he started all 96 games of his first six years.

In 2019, Schwartz signed a one-year contract extension for $11.255 million which will keep him till the 2021 season. With that extension, he became the second-highest-paid right tackle in the NFL. He won his first Super Bowl title after defeating the San Francisco 49ers in Super Bowl LIV.

Louis Oosthuizen Net Worth: How Rich is the Golfer Actually?