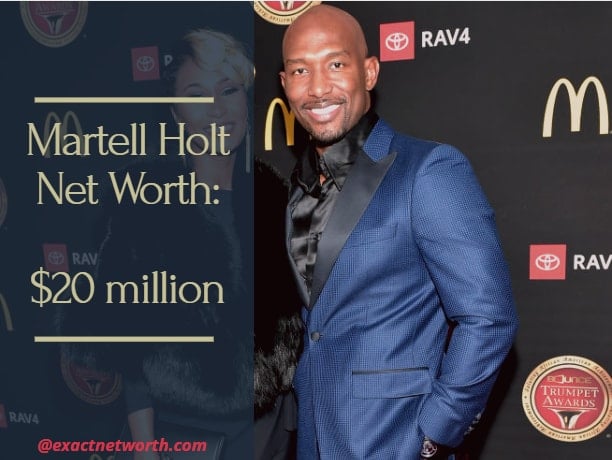 Martell Holt is an American entrepreneur, businessman, and reality TV personality. He is best recognized for his appearance on OWN network’s popular reality show “Love & Marriage: Huntsville”. Martell owns the company “Holt & Holt Entrepreneurship LLC”. At the start of 2022, Martell Holt net worth is estimated to be $20 million.

Martell Holt was born on the 4th of January in the year 1982. His birthplace is Huntsville, Alabama, United States. Martell studied at Alabama A&M University, from where he held a graduation degree in Education in 2008.

After graduation, he started teaching at Sparkman Middle School. As a teacher, he worked for a couple of years. In 2010, he resigned from his job and decided to make a career in the real estate business.

Martell Holt Net Worth and Career

Martell was keenly interested to make his career in the real estate world from an early age. In fact, he has completed Real Estate Course from the Nation School of Real Estate in 2006. As he was getting more ideas on the real estate business, he founded the company “Holt & Holt Entrepreneurship LLC” in 2009. Besides his own company, Holt has also been involved with Kappa Alpha Psi Faternity, Inc. as its member.

You May Also Like:   Shay Johnson Net Worth: How Rich is the Love & Hip Hop Star?

Besides the real estate business, Martell Holt is also famous for his appearance on the reality TV show “Love & Marriage: Huntsville”. He appeared on the show with his wife Melody. The show shows the relationships of six African American real estate business people residing in Alabama.

Martell and his wife, Melody have a big hand in the creation of the show “Love & Marriage: Huntsville”. In fact, it was their vision to create such kind of show. The idea reached the TV producer Carlos King. He loves the concept and made the decision to broadcast the show on OWN Network.

It won’t be wrong to say Martell has become more popular because of his married life rather than his profession. He is married to an entrepreneur, author, and motivational speaker Melody Holt. They were in a relationship for over a year, before getting married on July 20, 2008. Martell has four kids named Maliah, Mariah, Martell, and Malani Simone Holt.

The speculation of Martell and Melody getting separated is hitting nowadays. Some sources revealed that his wife Melody filed for divorce in June 2020. Reports claimed that they were separated in April 2020, and since then Melody didn’t allow Martell to met his kids. However, the coupled reconciled later and currently living together. It will be quite interesting to see their relationship when a new season of the series premiers on OWN Network.

You May Also Like:   LaTisha Scott Net Worth: Height, Age, Bio, Career & Husband

It’s not a surprise that Martell Holt has gathered a huge amount from his real estate business and TV show. It is reported that Martell Holt net worth is around $20 million at the start of 2022. Martell has also added some amount to his net worth through selling books and other merchandise activities. He is also the author of the book “The 9 to 5 Entrepreneur: Twelve Questions to Consider Before Taking the Leap”.

Dana Perino Net Worth: How Rich is the Fox News Commentator?