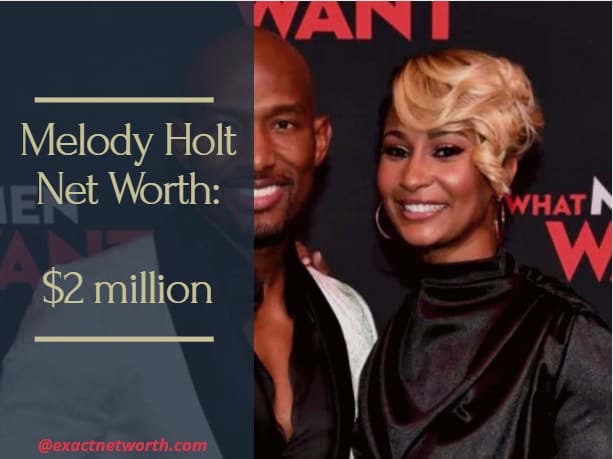 Melody Holt is an American entrepreneur, motivational speaker, and renowned reality TV star. She is best known for her appearance in the popular reality TV show “Love & Marriage: Huntsville”. Melody is also a co-founder of the multi-million dollar real estate company “Holt & Holt Entrepreneurship”. As of 2022, Melody Holt net worth is estimated to be roughly $2.2 million.

Famous reality TV star, Melody Holt was born on 11th November 1985 in the beautiful city Brundidge, Alabama. She is very close to her mother, Vanessa Rodgers Tracy who is a writer by profession. Melody considers mother Vanessa as her real model.

Holt has studied at Alabama A&M University. She graduated from the University with a Bachelors’s degree in English. Soon after graduation, she worked as a teacher at Middle School. Her husband Martell also used to teach at the same school.

Melody Holt Net Worth and Career

Melody and Martell were keen to do some extraordinary in the real estate business. As a result, they established a lawn care business. At first, they didn’t have any idea how to do business. Despite that, they worked really hard to flourish their business. In just seven years, they turned their small business into a multi-million dollar company. They named the company “Holt & Holt Entrepreneurship LLC’.

It is quite hard to make a name as a successful entrepreneur, which Melody and Martell made possible. Now, their company is considered a top-rated company in home expansions, restoration, and rehabs.

Keeping aside her successful business career, Melody also became popular after making an appearance in the reality TV show “Love & Marriage: Huntsville”. With the success of the show, both Melody and Martell became overnight reality TV stars. The reality TV show presented their up and down relation and dramas along with five other African-American real estate business people.

Melody is married to Martell Holt, who is not just a business partner but also a life partner. They tied the knot on July 20, 2008. She is blessed with four kids named Maliah, Mariah, Martell, and Malani.

Holt’s relation with her husband has been talking of the town since they had appeared on the reality show. Their relation suffered through a hard time when she found Martell dating another woman. After a cheating allegation, she left the home with her four kids. She even filed a divorce, but later they reconciled. Few sources revealed that they are living together just because they are also executive producers of the reality series.

The true relation between Melody and Martell wouldn’t get revealed until the new season the series premiers.

Starting 2022, Melody Holt total net worth is estimated to be around $2.2 million dollars. She has earned a huge amount from her real estate business and reality TV show. Melody earns $56K from just her TV shows. Besides that, she is also a motivational speaker. She accumulates $196 per hour from the motivational speaking event. Melody is also earning a hefty amount from her Instagram post, being around $6K for promoting a brand post.

Jim Bakker Net Worth: How Rich is the Televangelist Actually?

Steve Ross Net Worth: How Rich is the Painter Actually in 2022?