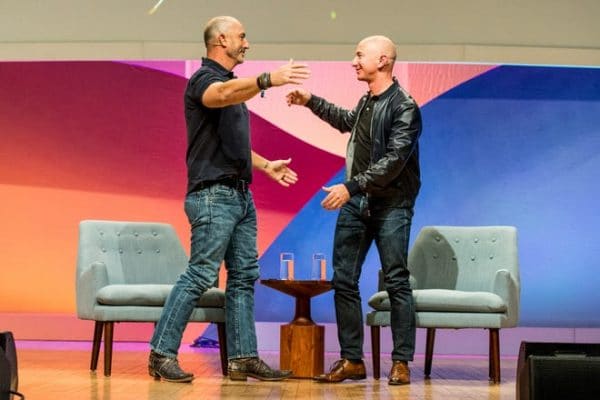 Mark Bezos is an American entrepreneur, best known as the younger brother of the founder of Amazon, Jeff Bezos. He is the co-founder of the private equity firm “HighPost Capital”. Mark is also a volunteer firefighter, who has been serving at the Scarsdale Fire Department since 2005. Mark will be joining his brother Jeff for Blue Origin’s first human space flight on July 20, 2021. As of 2022, Mark Bezos net worth is estimated to be above $40 million.

Mark Bezos was born on May 17, 1968, in Albuquerque, New Mexico. He is four years younger than his elder brother, Jeff Bezos, who turned 57 on January 12. Mark was born to parents, Mike, and Jackie, who met while serving at a local bank. His mother, Jackie, gave birth to Jeff Bezos when she was a teenager. Mark also has a sister named Christina.

Regarding his education, he has studied at the Stavanger American School from 1981 to 1988. After that, he joined Texas Christian University. He came out as a graduate from there holding a graduation degree in advertising and Public Relation.

Mark started his career serving at several ad firms like Saatchi & Saatchi, and DDB in New York City. In 1999, he founded a company named Bezos Nathanson Marketing Group. Mark served as a CEO at the company for seven years, before leaving it in 2006. Likewise, Mark started a foundation called Bezos Family Foundation in 1999, which supports rigorous and inspired learning environments. He is still connected with the foundation for 22 years.

You May Also Like:   Steven McBee Net Worth, Age, Parents, Farm, and Career

Mark has also been a member board of directors of the non-profit organization, iMentor, where he started working in January 2013. Likewise, in August 2017, he became associated with the Leary Firefighters Foundation as a member board of directors. In November 2005, he joined the Scarsdale Fire Department as a volunteer firefighter. He is still serving as a firefighter for nearly 16 years.

Mark has also been serving as a member of the leadership council at New York’s largest poverty-fighting organization, Robin Hood. In July 2019, he started a private equity firm called HighPost Capital. The equity firm is based in New York City and mainly focuses on growth equity investments and growth buyout.

On July 20, 2021, Mark flew to the edge of space along with his brother Jeff Bezos, Olivier Daemon, and Wally Funk.

Mark Bezos is married to a lady named Lisa Rogers, whom he met first time in Scarsdale. He moved to New York City after finishing college, and there, he fell in love with Lisa. Mark and Lisa share four kids; 2 sons and 2 daughters.

Mark shares a close bond with his brother, Jeff Bezos. Jeff has even mentioned Mark to be the funniest guy he met in his life. Mark will be joining his brother, Jeff, on the first human space flight of the New Shepard spacecraft. The spacecraft is made by Jeff’s space exploration company, Blue Origin.

The company is also auctioning 1 of 6 available seats, that will last for 11 minutes, and which takes the spacecraft 62 miles far from the Earth’s space. The spacecraft will head to space on July 20, 2021.

You May Also Like:   Tim Stokely Net Worth: How Rich is the CEO of OnlyFans Actually?

Mark is believed to have earned more than $1 million while he served at Robin Hood. Likewise, he has a big investment of around $10 million in direct-to-consumer video commerce platform, NBTV. In 2020, he sold his Scarsdale-based house for $11 million. Mark and his sister, Christina also own shares in his Jeff Bezos’ company, Amazon.

As of 2022, Mark Bezos’ personal wealth is estimated to be roughly $40 million. On the other hand, his brother, Jeff Bezos is the second richest person in the world with a huge net worth of around $186.2 billion.

Adam Mosseri Net Worth: How Rich is the Head of Instagram?

Brian Armstrong Net Worth: How Rich is Coinbase’s CEO Actually?