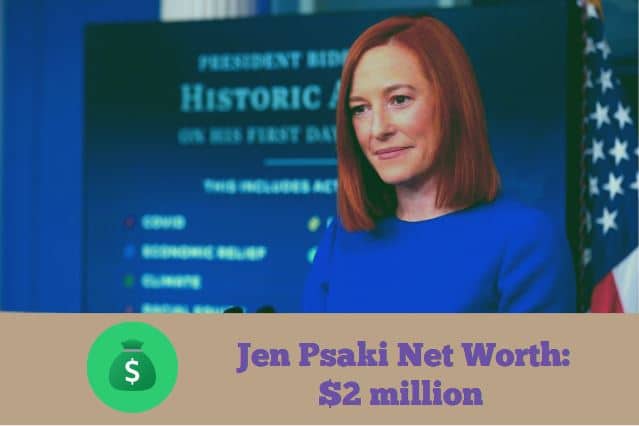 Jennifer Rene Psaki shortly known as Jen Psaki is an American political advisor. She currently serves as the 34th White House Press Secretary for the Biden Administration. As of 2022, Jen Psaki net worth is estimated to be $2.5 million.

Psaki was born on December 1, 1978, in Stamford, Connecticut to parents James R. Psaki and Eileen Dolan Medvey. Her father is a retired real estate developer while her mother is a psychotherapist.

Regarding her education, she went to Greenwich High School and graduated in 1996. She then received her degree in English and Sociology from the College of William & Mary. Psaki was also a swimmer and competed in several events during her time at the college.

Moving on to her husband, she is married to Gregory Mecher. He is a deputy finance director at the Democratic Congressional Campaign Committee. They got married in 2010 and have two children together.

Her political career started in 2001 when she was part in the re-election campaigns of Iowa Democrats Tom Harkin for the U.S. Senate and Tom Vilsack for the governor. In 2004, she became the deputy press secretary for John Kerry’s presidential campaign.

You May Also Like:   Paul Gosar Net Worth: How Rich is the Republican Congressman?

In 2008, she then served as traveling press secretary for the presidential campaign of Barack Obama. After Obama was sworn as the 44th President of the United States, she worked as Deputy Press Secretary and was promoted to Deputy Communications Director a year later. In 2011, she left that position to become senior vice president and managing director at Global Strategy Group.

Psaki then returned to the political field this time as press secretary for Obama’s 2012 re-election campaign. In 2013, she became a spokesperson for the US Department of State. Two years later, she returned to the White House as communications director and stayed till the end of the Obama administration.

After leaving White House as communications director, Psaki worked as a political commentator on CNN.

Jen Psaki now serves as the White House Press Secretary under the Biden Administration. Her first press briefing came on January 20, after the inauguration.

What is Jen Psaki Net Worth Actually?

As of 2022, Jen Psaki’s net worth is estimated to be $2.5 million. She has been in the political scene for over 17 years including three, four years at the White House. Her current salary as a press secretary is around $183,000 per year. Her time as a political commentator on CNN also contributed massively to her wealth.

AOC Net Worth: How Rich is the New York Congresswoman in 2022?

Liz Cheney Net Worth: How Rich is Liz Cheney Actually in 2022?