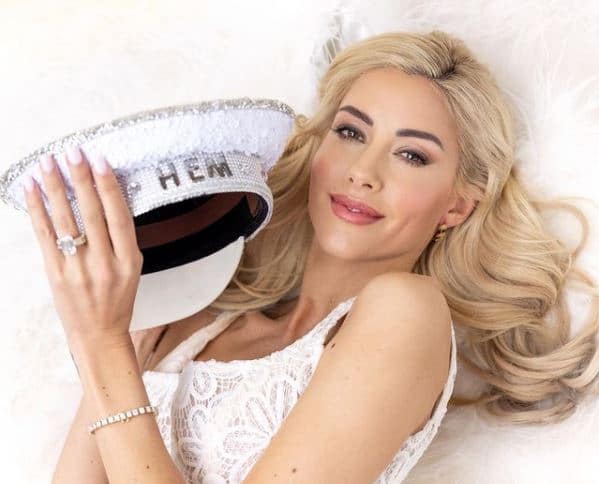 Heather Rae Young is a 34 years old American model, realtor, and reality star. She is best known for starring in the Netflix reality series “Selling Sunset”. Heather found early fame as a Playboy Playmate of the Month in 2010. As of 2022, Heather Rae Young net worth is estimated to be around $3.5 million.

Heather Rae Young was born on the 16th of September, 1987 in Anaheim, California, United States. She grew up in the small town of Running Springs which is based in the San Bernardino Mountains, California. She has not shared any detail regarding her parents, and educational background.

Talking about her work experience, she has initially worked as a server at the local pizza place. Then, she served at the Snow Valley Resort, where she was responsible for checking the tickets of customers. She has additionally worked as a clerk at the video store. Heather left her hometown when she turned 18.

As she was having a hard time in her life, she was eventually called up for a casting in a Playboy in June 2008. After passing through the early stage, she was called back for some test photoshoot, and in August 2009, she was featured on the Playboy Cyberclub website in the pictorial Lounge Acts. In February 2010, she was selected as a Playmate of the Month 2010 issue of the popular men’s magazine.

Heather started getting called up for more modeling work after being selected as a Playmate of the Month. To date, she has worked as a glamor, swimsuit, and lingerie model. She has likewise been featured as a spokesmodel for the 2010 Import Tuner Calendar, and the 2011 Fast Dates Calendar.

Heather has also been featured as a model for well-known brands such as Calao Swimwear, Carrie Amber lingerie DSO Eyewear, Superstar Swimwear, Hustler Lingerie, and 7 Til Midnight Lingerie. She has likewise been featured in an advertisement campaign for the Affliction Clothing Line.

Heather Rae Young married the star of the HGTV series, Flip or Flop, Tarek El Moussa on Saturday, October 23, 2021. Their wedding ceremony took place near Santa Barbara, Calif, where they were surrounded by their close friends and family. Tarek met Young first time in July 2019, and they confirmed their relationship in the following month.

Heather has recently shared that she initially didn’t accept Tarek’s proposal when he asked her out for the first time. However, she started liking Tarek after she started spending time with him. After knowing their compatibility, the pair moved in together in April 2020. Three months later, they celebrated their one-year anniversary. In July 2020, Tarek put a marriage proposal to Heather, and in reply, she said yes.

You May Also Like:   Dr. Oz Net Worth: How Rich Is the Television Personality in 2022?

As of 2022, Heather Rae Young’s personal wealth is estimated to be around $3.5 million. Heather earned her real estate license when he was 27, and within 3 months, she sold a $7.2 million house and a $1.5 million condo. Her beau, Tarek gifted her a white hardtop Ferrari 2019 on her 32nd birthday.

Theo Von Net Worth: How Rich is the Comedian Actually in 2022?