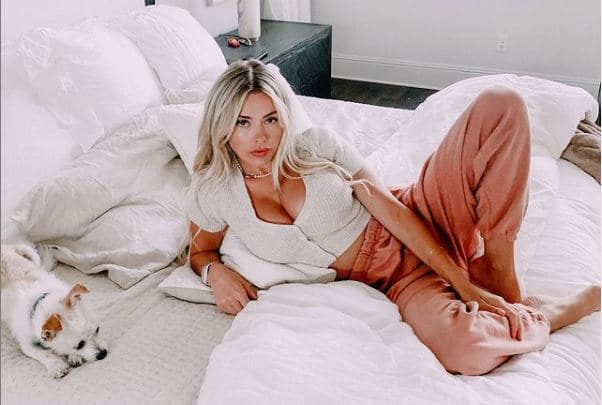 Corinna Kopf is an American model, social media influencer, and YouTuber. She is best known for her content related to lifestyle and beauty on Instagram and YouTube. Corinna was recently called a scammer after she re-posted her Instagram pictures on her OnlyFans page. As of 2022, Corinna Kopf net worth is estimated to be around $2.5 million.

Corinna Kopf was born on 1st December 1995 in Palatine, Illinois, United States. She has lived in the mid-west of the United States like Wisconsin, Iowa, and Missouri. Most of the information related to her early life, parents, and academic background is still missing. However, we came to know that she is of German descent, and she can speak the German language fluently.

Corinna didn’t complete her school education, as she drooped out to pursue a career in social media. She has also worked as a nanny in Malibu while studying in school.

On August 18, 2012, she started he social media career by creating an Instagram account. In nearly 9 years, she has gathered 5.7 million followers on Instagram, where she has posted 759 posts.

Corinna’s most of the pictures, and videos receive a million likes and views. One of her most popular posts on Instagram consists of a video of Spring Awakening, which she made while attending an electronic music festival in 2014. After some time, she took a further step in social media and joined Twitter. To date, she has earned 2.2 million followers on Twitter.

On YouTube, she is most popular for her storytime videos. Likewise, she is also known for making videos on fashion and beauty content. She also makes challenge videos by collaborating with other YouTubers like Dourte Dom, Liza Koshy, Joseph Peck, Nick Ben, and others. However, she is mostly known for her collaboration video with David Dobrik.

Corinna doesn’t seem quite active on YouTube nowadays. In fact, she made her last video a year back on February 7, 2020, on the title “My New House!! Tour + Vlog Squad Reaction.”. Most recently, she has created an OnlyFans Page on Instagram, after she announced on opening of her OnlyFans Page account in exchange for 500,000 likes in her announcement tweet. However, Corinna’s fans started calling her a scammer, after she re-posted her Instagram photos on her FansPage account.

Corinna Kopf is assumed to be single right now. In past, she has dated “Viner” Toddy Smith. She was in a relationship with him for a year from 2017 to 2018. Corinna has also dated a fellow social media personality, Jack Dail for a certain time. She was recently linked up with Twitch streamer, Adin Ross after he kissed her on a live stream. However, Adin cleared the rumor calling her just a good friend.

As of 2022, Corinna Kopf’s personal wealth is estimated to be around $2.5 million. According to Social Blade, she earns around $66,000 in a year from her YouTube channel. Corinna is also a Fortnite gamer, who signed a streaming deal with Facebook gaming in 2019.

Nelk Boys Net Worth: How Rich are the NELK Members Actually?