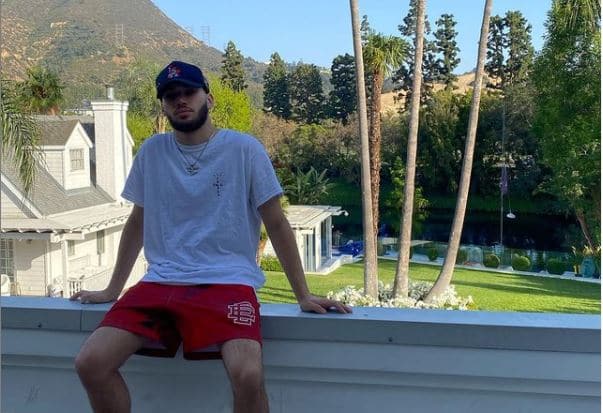 Adin Ross is an American Twitch streamer. He is best known for his AdinRoss Twitch Channel, where he streams Grant Theft Auto V and NBA 2K videos. Through streaming games on Twitch, he has earned over 4 million followers on his Twitch channel. As of 2022, Adin Ross net worth is estimated to be roughly $3 million.

Adin Ross was born on 11th October 2000 in Boca Raton, Florida, United States. He has stayed in different cities in his childhood since his parents were in an unstable relationship. Adin has a sister named Naomi. He has earlier studied at Hebrew school, and after moving to Fresno, California, he joined high school there. He was interested in streaming from an early age. In fact, he used to skip his classes to stream on Twitch.

Adin became a regular Twitch streamer in 2019. In his early days, he joined the NBA 2k group named Always Excelling, and there he became a friend with Bronny James. Along with James, he became popular by playing the NBA 2K20 game. Both used to play wager matches with other Twitch streamers. In July 2020, he did a 2k wager for 50K in a night, which pulled over 11K views in the end.

After being unsatisfied with NBA 2K21, he started a Twitter hashtag #make2kfunagain in November 2020. The hashtag trended #1 worldwide on Twitter. At the same time, he also used to host e-date streams, where he got an opportunity to grow his Twitch account. He revealed his own GTA V server called SSB Wrld. He also became the first creator to be in the collective Clout Gant 2.0.

Besides making videos on NBA 2K games, he is also popular for his IRL content. He started making video game commentary after being a part of the group called SSB (Stacy’s Stepbrothers) in February 2020. In April 2021, his followers increased to three million after he was hit by botted followers. However, it didn’t have any impact on his video streaming, he was still able to gain hundreds of thousands of live viewers.

Adin Ross was rumored to be dating an American YouTuber, Corinna Kopf. The rumor started when Adin kissed her in a live stream. After he came to know about the rumor, he googled typing about his current girlfriend, and the result shows Corinna Kopt. He was quite displeased with the result and cleared the rumor by claiming Corinna as just a good friend.

Adin had an unwanted beef with the rapper, Foolio in April 2021, when he dissed Foolio by singing his song “Who I Smoke”. Later, he had to apologize to Foolio for dissing him. However, a week later, he unknowingly sang his song on his IG Live. The matter later solved when Foolio showed up as a guest on his stream.

As of 2022, Adin Ross has accumulated a total net worth value of $3 million. Besides earning from Twitch, he also earns a handsome amount from YouTube. His official YouTube channel, Adin Live has 2.53 million subscribers and over 470 million views.

As per sources, he earns around $3.2 million in a year from his YouTube channel. In March 2021, Adin revealed that he would be donating 10% of his Twitch monthly earnings to a charity.

SteveWillDoIt Net Worth: How Rich is the YouTuber Actually?