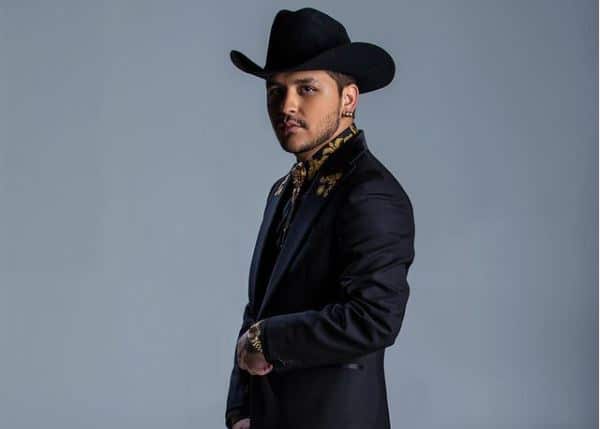 Christian Nodal is a 23 years old Mexican singer. He is best known for his debut studio album “Me Deje Llevar”. Christian has recently got engaged to Mexican pop star, Belinda on May 25, 2021. As of 2022, Christian Nodal net worth is estimated to be roughly $2.5 million.

Christian Nodal was born on 11th January 1999 in Caborca, Sonora, Mexico. He was interested in singing from his early days. In fact, he started singing at just 4 years of age. He was able to play the guitar and piano on his own.

At the young age of 18, he came up with the song titled “Adios Amos”, which became a big hit. The song was equally loved in the United States, which peaked at 2nd spot on Billboard Top Latin Songs chart. After six months, he made a collaboration song with Spanish singer David Bisbal, and dropped a song titled Probablemente”.

Christian released his first studio album titled “Me Deje Llevar” on August 25, 2017. The album turned out to be a massive hit. RIAA certified his album a 3x Platinum, and AMPROFON certified it as Platinum+Gold. The album also earned him a nomination at the 19th Annual Latin Grammy Awards in the category of Latin Grammy Award for Best Ranchero Album. He was also nominated as the Best New Artist, however, he lost the award to Colombian reggaeton singer, Karol G.

You May Also Like:   Brandy Norwood Net Worth: How Rich Is the Singer in 2022?

Nodal dropped his second studio album titled “Ahora” on May 10, 2019. The album was successful to get him more recognition and fame. It was certified Platinum by RIAA, and Gold by AMPROFON. Likewise, the album was peaked at the 19th spot on the Mexican chart, and the 7th spot on the US Latin chart.

Christian released his third studio album titled “Ayayay!” on May 29, 2020. The album was certified gold by RIAA and reached the 8th spot on the US Latin chart. On July 10, 2020, he released an official music video of the song titled “Aqui Abajo”. To date, the video has garnered over 146 million views on YouTube.

Likewise, on November 13, 2020, he released his official video of the song “Dime Como Quieres”. The song became very popular among music lovers, and it went on to receive more than 341 million YouTube views. Recently, Christian has been releasing the audio version of his latest songs. His most recent song titled “Por Que Te Portaste Mal” was released on May 21, 2021.

Christian Nodal is currently dating a Mexican singer, Belinda. They are in a relationship for more than a year. Christian and Belinda met first time on the set of TV Azteca’s “La Voz”. Their love story is believed to be started from there, and after few months, Nodal confirmed their relationship by sharing a video of two kissings on a boat through Instagram.

Christian and Belinda have recently announced their engagement news through Instagram. On May 25, 2021, Nodal shared a picture with Belinda, where he was kissing her. Belinda was seen flaunting off her diamond ring on her finger. Both have reportedly worked on the collaboration theme song of Univision’s telenovela “Si Nos Dejan”.

You May Also Like:   Matt Pokora Net Worth: How Rich is Christina Milian's Partner?

As of 2022, Christian Nodal has gathered a total net worth value of $2.5 million. He has collected the hefty figure from his music career. Christian might also be earning a good amount from his YouTube channel, where has 8.1 million subscribers, and over 5 billion views.

Shenseea Net Worth: How Rich is the Singer Actually in 2022?