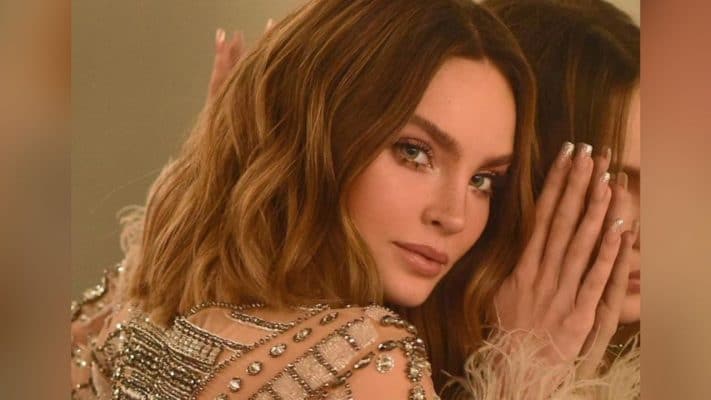 Belinda is a renowned Mexican singer and actress. As a singer, she claimed prominence with her debut album “Belinda”. To date, she has sold over 2 and half million copies. As an actress, she is best known for her amazing performance in 2000 released children’s telenovela “iAmigos x Siempre”. As of 2022, Belinda net worth is estimated to be roughly $11 million.

Belinda got engaged to Mexican singer-songwriter, Christian Nodal. She shared the engagement news through her Instagram on May 25, 2021.

Belinda was born on 15th August 1989 in Madrid, Spain. She was born to parents, Ignacio Peregrin Gutierrez and Belinda Schull Moreno. Her father, Ignacio used to run several factories in Europe. When she was 4 years old, her family permanently to Mexico City. She also has a younger brother named Ignacio.

Belinda was interested in acting and singing from an early age. She even used to make home videos. At the young age of 10, she got selected to appear in the children’s telenovela “iAmigos x Siempre!”. The show became very successful. She also featured on the soundtrack of the show. Later, she appeared in another telenovela “Aventuras en el Tiempo”, which earned her more recognition.

Belinda’s career in acting started in 2002 after she portrayed the role of twins in the children’s teen telenovela “Complices Al Rescate”. She also featured on two soundtracks for the telenovela, which earned her first nomination at Latin Grammy. Belinda dropped her first self-titled first studio album “Belinda” on 5 August 2003. The album turned out to be a huge hit in Mexico and Latin America.

On July 2, 2013, she released her fourth studio album titled “Catarsis”. Five tracks from her album were already leaked online on July 21, 2012. The lead song from the album “En El Amor Hay Que Perdonar” was a massive hit, which peaked at No. 1 spot on the Mexican singles chart, and stayed in the top spot for a week.

Belinda has also appeared as one of the coaches on the Mexican singing competition show “La Voz”. She is still a part of the singing reality show. She has additionally given her voice for many animated movies like “The Tale of Desprereaux”, “Tad, The Los Explorer”, “Trolls”, and “Trolls World Tour”.

Belinda is presently dating a Mexican singer, Christian Nodal. She recently got engaged to him on May 25, 2021. Belinda shared engagement news by sharing a picture with Christian flaunting her engagement ring. Before Christian, she was dating an American magician, Criss Angel, with whom she separated in 2017.

Belinda has gathered a huge net worth value of $11 million by 2022. She has earned a vast chunk of money from her music career. Belinda also owns a music promotion company, Joy Music, which promotes concert tours and independent albums. She also owns a luxury karaoke bar named La Chismosa Canta Bar in Mexico.

You May Also Like:   Mason Ramsey Net Worth: How Rich is the Singer Actually in 2022?

Jessie Woo Net Worth: How Rich is the Singer Actually in 2022?