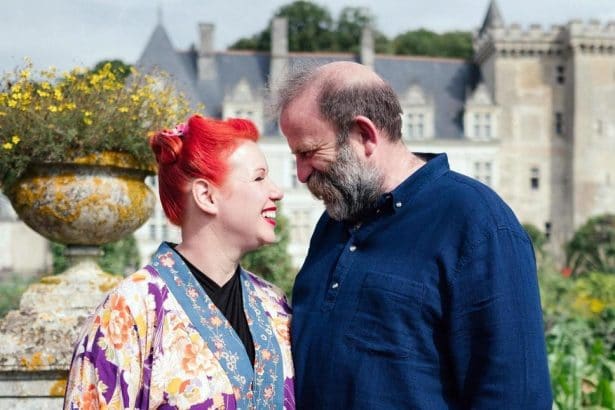 Angel Strawbridge is a British entrepreneur, author, and TV personality. She is best known for her appearance on Channel 4’s documentary series “Escape to the Chateau”. Angel is the founder of the hospitality company “The Vintage Patisserie”. As of 2022, Angel Strawbridge net worth is summed up to be roughly $2 million.

Angel Strawbridge was born on April 7, 1978, in East London, South Africa. She was born to parents, Stephen and Jennifer Newman. After living a short time in East London, her family shifted their place to Canvey Island in Essex. There, her parents ran a jewelry shop. She has a brother named Paul, who is currently looking after the shop.

Angel used to help her parents in their shop, and due to that, she developed an interest in craft, fashion, and style. She moved back to her old place, East London in 1995. There, she started selling vintage old items at Old Spitalfields market. After a year in 2000, she joined East London School House. By getting involved in the schoolhouse, she got a chance to listen to jazz, enjoy delicious food, and try vintage clothes.

Angel is a qualified chartered accountant. She holds a degree in business studies. Angel has even helped many London advising companies briefing on their profit and loss. Besides that, she has also got training as an image consultant at the Aston+Hayes Institute. After few years, she launched her own event company “The Vintage Patisserie”.

She expanded the growth of her company by appearing on BBC Two’s TV show “Dragon’s Den”. There, she found investing partners like Theo Paphitis and Deborah Meaden. However, after the end of the show, the partnership failed to continue.

Angel became a known TV personality after Channel 4 made a show called “Escape to the Chateau”, featuring her husband Dick Strawbridge and herself. The first season of the series started on June 5, 2016. To date, the series has gone for the 7th season. Along with hubby Dick, she has renovated 45 room chateau and made it look like a new house.

Angel Strawbridge is married to a British TV presenter, and former army officer, Dick Strawbridge. She met him the first time when she was appearing on Dragon’s Den. Both started liking each other, and they eventually got married in November 2015.

Angel and Dick moved to France in January 2015 and purchased 19th Century Chateau de la Motte-Husson. Their wedding vows took place in Chateau after renovating few parts of the house. Both had worked really hard to renovate houses, as it has no electricity, and running water.

With hubby Dick Strawbridge, Angel is blessed with two kids; Arthur Donald and Dorothy Francis. According to sources, she and Dick are reportedly having some issue with their son, Arthur Donald, which is impacting on opening their chateau for weddings.

As of 2022, Angel Strawbridge’s net worth is estimated to be around $2 million. She is earning a good amount from renting her chateau for the wedding. According to sources, Angel and Dick are charging an average price of around $47,152, which would have a maximum of 80 wedding guests. Their chateau is currently valued at over $2 million.

You May Also Like:   Ken Jennings Net Worth: How Rich Is the Game Show Contestant in 2022?

On the other side, her husband’s net worth (Dick Strawbridge) is estimated to be roughly $3 million.

Antonia Lofaso Net Worth: How Rich is the Chef Actually in 2022?

Brandi Glanville Net Worth: How Rich is the RHOBH Star Actually?