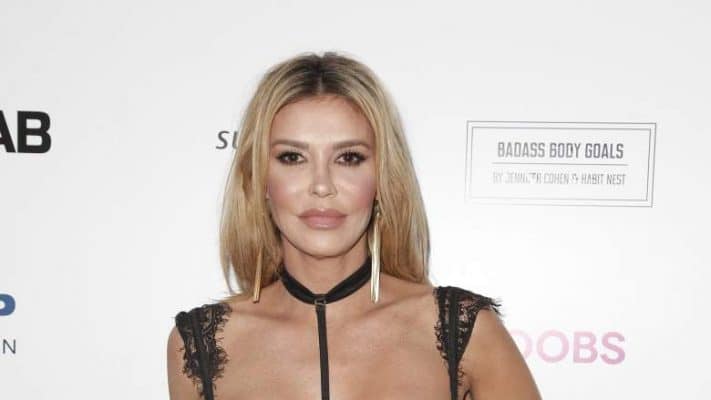 Brandi Glanville is a well-known American reality TV personality and fashion designer. She is best known for her appearance on Bravo TV’s reality series “The Real Housewives of Beverly Hills”. Brandi is not a part of the 11th season of the reality show. As of 2022, Brandi Glanville net worth is estimated to be around $5 million.

Brandi Glanville was born on the 16th of November, 1972 in Salinas, California, United States. She was born to parents Guy and Judith Glanville. Brandi grew up with two siblings, Tricia and Michael. Her father, Guy used to grow marijuana, and Brandi had admitted on Celebrity Big Brother that she had sole marijuana. In fact, she used to blackmail her dad to get some money.

Regarding her education, she initially joined Willow Rancho Baptist School. After that, she earned a high school graduation degree from John F. Kennedy High School. When she reached 16, she moved to Paris, France to pursue a career in modeling. She eventually signed under Elite Model Management.

As a model, she took part in Paris runway shows. In addition to that, she has made an appearance in several magazine covers like Glamour, Beverly Hills Lifestyle Magazine, and Cosmopolitan, NW. She has also worked for renowned brands like Valentino, Gucci, Giorgio Armani, and Versace.

You May Also Like:   Crystal Harris Net Worth: How Rich is the Model in 2022?

Brandi became a prominent TV figure after she made an appearance on the 2nd season of the reality show “The Real Housewives of Beverly Hills”. She appeared as a Friend of the Housewives throughout the season. In 3rd season, she joined the reality series as a main cast member. She appeared as a main cast member until its 5th season. However, she was fired after its 5th season. But, she returned to the series in the 6th, 7th, and 10th seasons.

Glanville, in 2015, joined another reality show “Celebrity Apprentice” for its 7th season. She was near to reach the finale of the reality series, but, she ultimately got fired 2 weeks before the finale episode. In 2016, she made an appearance on the reality show, “Famously Single”. Likewise, she participated in the cooking show “My Kitchen Rules” along with Dean Sheremet.

Brandi also appeared as one of the housemates in the 20th season of the British reality show, “Celebrity Big Brother UK”. She was eliminated from the show after completing the 17th day.

Brandi Glanville was married to actor, Eddie Cibrian. She tied the knot with him in 2001. Brandi shares two sons named Mason and Jake with ex-hubby Eddie. The pair separated in July 2009, after Eddie started dating country music singer, LeAnn Rimes. Their divorce was officially finalized on 30th September 2020.

As of 2022, Brandi Glanville has gathered an enormous wealth of $5 million. Besides her reality show appearances, she has also launched a clothing line, Brand B. She launched her T-shirt line in 2014, which a price ranges from $25 to $30. Brandi was earning a salary of $175,000 per season for her appearance in “The Real Housewives of Beverly Hills”.

Angel Strawbridge Net Worth: How Rich is Angel Adoree in 2022?

Taina Williams Net Worth: How Rich is Emily Bustamente’s Daughter?