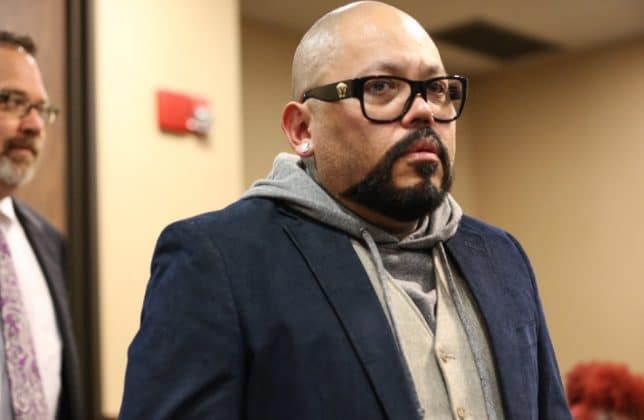 A.B. Quintanilla is a well-known American record producer, songwriter, and musician. He is best known for being a part of the family band, Los Dinos, and a group, Kumbia Kings. Quintanilla is an elder brother of the late singer, Selena Quintanilla-Perez. As of 2022, A. B. Quintanilla net worth is estimated to be around $5 million.

A.B. Quintanilla was born on 13th December 1963 in Toppenish, Washington, United States. His full name is Abraham Isaac Quintanilla III. He was born as the oldest kid of singer, Abraham Quintanilla Jr. One of his sisters, Selena Quintanilla is a famous singer, who was murdered on 31st March 1995.

He was interested in music from an early age. A. B. even learned to play guitar and bass at a young age, residing in Lake Jackson, Texas. Later, as he grew up, he worked along with his father and two sisters, Selena and Suzette on a band named Los Dinos.

After some time his sister, Selena became a renowned singer, He became her producer later, and even wrote several hit songs for her, including Como la Flor and Amor Prohibido.

After Selena was killed on March 31, 1995, he was left in sorrow and heartbroken. On the memory of his sister, he later produced a song titled Como Te Exrano, which was sung by Pete Astudillo. For the song, Pete later earned an award in the category of “Best Song of the Year” in 1996.

You May Also Like:   Luis Felber Net Worth: How Rich is Lena Dunham Husband Actually?

Quintanilla later created a group called Kumbia Kings in 1999. The group composed songs with a combination of cumbia and pop music. He started getting popular after the group released several CDs and participated in various shows. After working with the music band for nearly seven years, he abandoned the band in mid-2006. The reason for leaving the band was revealed as he had a controversy with one of the band members, Cruz Martinez.

Soon after some time, he created another band called, Kumbia All Startz. The group consists of some new members and two ex-members from Kumbia Kings, Chris Perez, and Pee Wee. With the new band, he gave hit songs like Chiquilla, Speedy Gonzales, and Parece Que Va a Llover. The band gained wide recognition, especially in South America and Bolivia, after performing several concerts and music shows in 2014.

In 2016, Quintanilla signed a recording deal with DEL Records, and after some time, he formed a group named Elektro Kumbia. He even released an album with the same name on June 30, 2017. He gave one of his biggest hit songs titled “Pina Colada Shot” with the band. The official music video of the song was released on January 28, 2017. It received over 3.3 million YouTube views.

A.B. Quintanilla has been married for the fifth time. At first, he tied the knot with a lady named Evangelina Almeida in 1988. He got married for the second time to Heather Grein in 2002. However, the marriage lasted for just 2 years before it ended in 2004. On New Year’s eve in 2014, he married his third spouse Brenda Ramirez.

You May Also Like:   Tony Bennett Net Worth: How Rich is the Legendary Singer Actually?

On November 12, 2011, he shared the wedding vows with his longtime girlfriend, Rikkie Leigh Robertson. After spending more than 4 years, he got separated with a divorce on July 5, 2016. He got married for the fifth time to an Argentinian woman, Anjelah O on September 16, 2019. He has a total of eight kids and one grandchild.

A. B. Quintanilla has collected a huge fortune of $5 million by 2022. He has been able to amass the big amount all from his music career. Though, most of his wealth has come from being a producer of the music band, Elektro Kumbia. Likewise, he has also added some amount from his family’s music company, Q-Productions.

Tobe Nwigwe Net Worth: How Rich is the Singer Actually in 2022?

Jake Hoot Net Worth: How Rich is the Country Singer Actually?