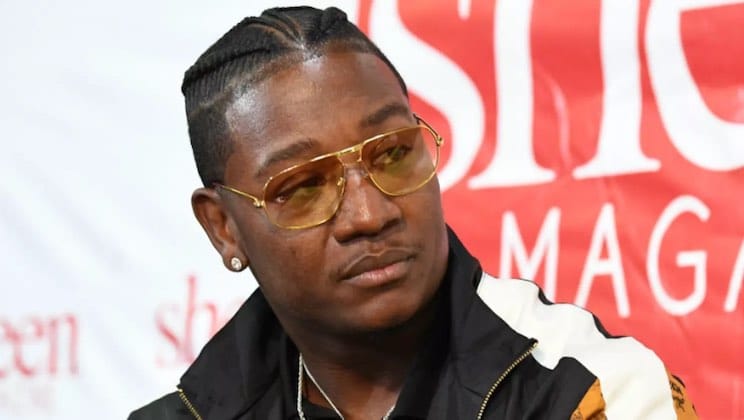 Yung Joc is an American Grammy and BET Award-nominated rapper. He is best known for his hit songs, It’s Goin’ Down, Coffee Shop, and Bottle Poppin. In addition, he is recognized for being featured on the rapper, T-Pain’s US number-one song, Buy U a Drank (Shawty Snappin’)’. As of 2022, Yung Joc net worth is roughly around $4 million.

Yung Joc was born in September 1980 in Atlanta, Georgia. He was born to Stanley Tucker, who owned a hair-care product company. In his teenage days, he aspired to become a basketball player. However, later he realized his passion and eventually made a decision to become a rapper.

Yung began his rapping career in 2005 after he met Atlanta producer, Nitti Beatz. Along with Beatz, he recorded the hit song, It’s Goin Down in the spring of 2005. Afterward, he teamed up with the Block Enterprises label’s founder, Russell “Block” Spencer, and signed a multimillion-dollar deal with Sean Combs’s Bad Boy South. That same year, Bad Boy released his first studio album, New Joc City.

Joc continued his rapping career and was featured on the songs, Show Stopper and Call U Out. That same year, he was included at No. 20 on the 2006 Forbes Richest Rappers List. His hit song, It’s Goin’ Down’ charted at Number 3 on the Billboard Hot 100. After that, he came up with another song, I Know U See It, which charted at No. 17 on the Hot 100.

In 2007, he released his second studio album, Hustlenomics. In the first week of release, the album sold 69,000 copies and debuted at No. 3 on the Billboard 200. Later, he was featured in the hit songs, Get Like Me, So Fly and Beep. In August 2009, he dropped a mixtape, Grind Flu through his own label, Swagg Team Entertainment. A year later, he released his first song titled, Yeah Boy from the album, Mr. Robinson’s Neighborhood. In March 2014, he released the first official song, I Got Bitches from his upcoming third album. He followed up with his second song, Features featuring rapper, T-Pain in September 2014.

Yung formed a new record label, Swagg Team Entertainment in 2010. He went through a widely publicized lawsuit with Bad Boy South and Block Entertainment while forming a record label. He shared about the lawsuit in a 2015 interview. Joc’s label released their debut song, Looking Boy from the Chicago rap group, Hotstylz. Along with that, the record also debuted the Dallas rap group, GS Boyz with their first song, Stanky Legg.

Yung Joc is married to Love & Hip Hop: Atlanta star, Kendra Robinson. He exchanged wedding vows with Kendra on November 7, 2021. Yung proposed to Kendra on the season finale of Love & Hip Hop Atlanta.. His beloved wife, Kendra is an attorney by profession and runs a law firm, Robinson & Associated.

Previously, he was married to a lady named Alexandria Robinson. He sustained his marriage life with Alexandra from 2001 to 2014. They shared three kids together before they divorced in 2014. After that, he had affairs with four different women. As of now, he has 8 kids from five women.

Yung Joc accidentally sent $1,800 via Zelle to the wrong person in October 2022. He pleaded with the person to send his money back, however, the person blocked him. Joc shared the text exchange with the person on his social media, where he wrote “I don’t know you nor do you know me. Please do the right thing. God has a bigger blessing for you”. He later asked his followers to reach out to the number if they could get in contact with the person.

Yung Joc’s net worth is estimated to be around $4 million as of 2022. He has earned a vast chunk of money from his rapping career. Additionally, he has been appearing as a supporting cast member on the VH1 reality series, Love & Hip Hop: Atlanta since 2014. He has also appeared on the first season of VH1’s horror reality series, Scared Famous.

Chingy Net Worth 2022: How Rich is the Rapper Actually?

Island Boys Net Worth: How Rich are Twin Rappers Actually in 2022?