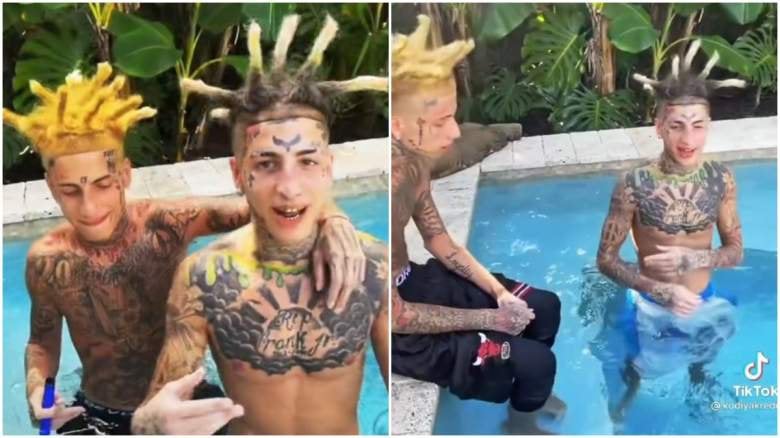 Flyysoulja and Kodiyakredd, better known as Island Boys are American twin rappers. The musical duo is best known for their viral song “I am Island Boy”. The song went viral in October 2021 after it was released on TikTok. As of 2022, Island Boys net worth is estimated to be around $600 thousand.

Island Boys, whose real names are Alex and Franky Venegas were born on the 16th of July, 2001 in Florida, United States. They were also popular through their stage name Flyysoulja and Kodiyakredd. There is not enough information available on their parents, early life, and educational background.

However, in one of their YouTube video, they have featured their mom where she said the twin brothers are born in the United States. Through the video, we also came to know that their parents were originally from Cuba. The twin brothers lost their father due to a heart attack when they were quite young.

Flyysoulja, whose real name is Alex Venegas released an original song titled “Money” in 2021. On the other hand, his twin brother, Kodiyakredd, whose real name is Franky Venegas started his musical journey in 2020. Franky was previously known as redd_4x. He has released a few songs in 2000 like “Real Right”, “Smoke”, and “9ine”.

Flyysoulja and Kodiyakredd came with their new song titled “I am Island Boy” in October 2021. As soon as they released the song on TikTok, it went viral all over the place. In the TikTok video, the twin brothers are seen singing their new song in a water tub. After the release of their TikTok video, the twin brothers have become a TikTok star. Their followers on TikTok increased in a huge number after the viral video.

As of now, the official TikTok account of Flyysoulja has 1.3 million followers, and his brother, Kodiyakredd has 714.2K followers. Besides their popularity on TikTok, the twin brothers also have a YouTube channel named Big Bag Ent, where they regularly post vlogs, audio clips of their songs, and music videos. On October 15, 2021, they uploaded their viral TikTok video on YouTube. As of now, the video has garnered over 5 million views.

The 20 years old viral Island Boys have not talked much about their relationship status yet. However, after digging into Flyysoulja, we found that he might be dating an Instagram user @toxiicfaiiry. On October 14, he posted a picture with @toxiicfaiiry where he mentioned his lady love as a soulmate baby.

Likewise, Kodiyakredd also seems to be seeing someone at the moment. On September 2, 2021, he posted a video on Instagram dancing with a lady. He captioned the Instagram video as “Get to Know Me”.

As of 2022, Island Boys net worth (combined) is estimated to be around $600 thousand. In addition to their earnings from TikTok, the twin brothers might also be earning a handsome figure from their YouTube channel where they have 28.4K subscribers and over 8 million views.

Yung Joc Net Worth: How Rich is the Rapper Actually in 2022?