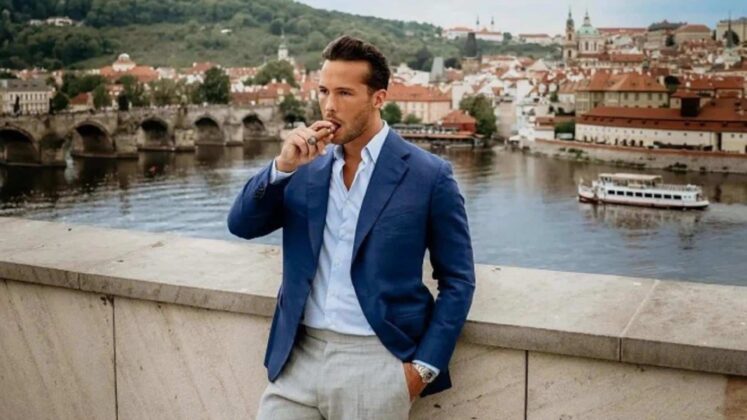 Tristan Tate is a retired British-American professional kickboxer, businessman, and commentator. He also appears sometimes as a fight commentator for Eurosport and Boxnational televised events. Tate was a two-time International Sport Karate Association kickboxing champion before he retired from his professional career. As of 2022, Tristan Tate net worth is estimated to be around $100 million.

Tristan Tate was born on July 15, 1988, in England. He spent his childhood days growing up with his family in Luton. His father’s name is Emory Tate. He was a former professional chess player. He lost his father due to a heart attack on October 17, 2015. Not much detail is available regarding his mother.

Tristan learned kickboxing at Storn Gym in his hometown of Luton. He was trained under coach, Amir Subasic. Tate has participated in many kickboxing championships. He has been a European kickboxer and k1 champion fighter for the Efnusion fight federation. Tate was known to people after he appeared in the fourth season of the reality series, Shipwrecked: The Island.

Tate came into the limelight for his arrogant behavior in the series. After that, he retired from kickboxing and shifted his place to Romania with his brother, Andrew. The two brothers then focused on establishing their empire of businesses. Tristan and his brother, Andrew are often considered appealing guests on podcast shows due to their unfiltered viewpoints and controversial statements.

Tristan spilled the unshared stories about his relationship with his brother on the podcast called Playing With Fire podcast. During the podcast, he said that the two agree on everything, even though their interests and the way they live are ever so slightly different. Along with Andrew, he runs a webcamming business called Webcam Studios.

The Tate brothers also founded and established Hustler’s University together. It is basically an online company that offers many digital courses on how to make money, date women, and connect with other entrepreneurs.

Tristan Tate was previously dating the popular Romanian model and TV presenter, Bianca Dragusanu. He was highlighted all over the media when the news broke out that he was dating Dragusanu. His former girlfriend, Biana reportedly moved in with him after she left her husband.

Tate and Dragusanu were romantically involved until 2018. After that, the unspecified reasons ended their relationship. Biana’s reputation was ruined after her infidelity was discovered. Her show, I Want You Close To Me was also canceled following the revelation of her infidelity.

According to several news outlets, Tristan and Biana split up due to Tate’s affair with an unknown woman. The affair news broke out through one of the fans who released a video showing Tristan’s lookalike man getting into an intimate setting with an unidentified woman. It is not yet sure whether the man in the video was Tristan or not. But, it is confirmed that it is not the real reason why Tate and Dragusanu broke up.

You May Also Like:   Leslie Jordan Net Worth 2022: How Rich was the Actor Actually?

Tristan Tate’s personal wealth is estimated to be around $100 million as of 2022. Tate has a collection of supercars including a Lamborghini Huracan Spyder, a Vanquish S Ultimate Aston martin, and a Mclaren 720.

Tristan has written a book about his father’s life titled “Triple Exclama!!! The life and games of Emory Tate, chess warrior”. In addition, he appears as a commentator on prominent fight shows around the world such as Its Showtime, Superkombat, RXF, and Enfusion Live. Tristan’s comments often focus on two of the largest eRopes platforms for transmission of fight sports, Boxnation and Eurosport.

Art Laboe Net Worth: How Rich was the American DJ Actually?

Robbi Jade Lew Net Worth: How Rich is the Poker Player Actually?