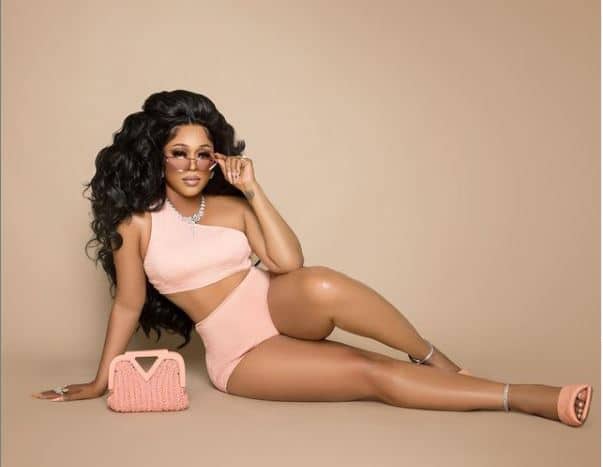 Katrina Laverne Taylor, better known as Trina is an American rapper, model, actress, and TV personality. She is best known for her appearance on Trick Daddy’s song “Nann Nigga”. Trina’s song “Pull Over” was listed at No. 27 in the Top 50 Best Rap Songs by Women by Complex in 2013. As of 2022, Trina net worth is estimated to be roughly $8 million.

Trina was born Katrina Laverne Taylor on the 3rd of December, 1974 in Miami, Florida, United States. She spent her childhood days growing up in Liberty City. Trina belongs to mixed ethnicity as her father is originally from the Dominican Republic, and her mother is from the Bahamas. Her parents separated when she was a small kid.

Regarding her education detail, she has studied at Miami Northwestern Senior High School. She was a majorette in high school. Though she was interested in rapping, she decided to enter the real estate business. She even studied real estate to become a licensed real estate agent.

During the time she was in the process to get a real estate license, she came to the notice of the Miami rapper, Trick Daddy. The rapper offered her to make an appearance on his song “Nann Nigga”. It was the lead song from Trick’s second studio album titled “www.thug.com”. The song made her an overnight popular, and she decided to initiate her rapping career.

Trina started her rap career by signing a record deal with Slip-n-Slide Records. She dropped her first album titled “Da Baddest Bitch” on March 21, 2000. Her debut album became an instant hit that peaked at 33rd spot on the US Billboard 200, and 11th spot on the Top R&B/Hip-Hop Albums Chart. The album was certified Gold by the RIAA in November 2000.

Trina began her own record label imprint named Diva Enterprises in 2001. She eventually signed a 9-year-old singer, Lil’ Brianna to her record label in September 2002, who later appear on her track “Kandi”. She dropped her second studio album titled “Diamond Princess” on August 27, 2002. The album was a big hit that peaked at the 5th spot on the Top R&B/Hip-Hop Albums chart.

Trina came up with her third studio album titled “Glamorest Life” on October 4, 2005. Her third album debuted at 11th spot on the Billboard 200. She left Atlantic Records in May 2007 and signed to EMI. In April 2008, she dropped her fourth studio album titled “Still da Baddest”. She continued to achieve more fame and success through releasing her next studio albums “Amazin’”. and “The One”.

Trina is currently dating a Miami rap artist, Raymond Taylor. Her alleged boyfriend, Taylor is 13 years younger than her. Trina and Raymond have openly come out as a couple. They often post pictures together on Instagram. Prior to dating Taylor, she was in a relationship with rapper, Lil Wayne.

You May Also Like:   Lil Key Net Worth: How Rich is the Rapper Actually in 2022?

Trina confirmed in an interview with Wendy Williams on October 5, 2005, that she and Wayne were engaged. She also became pregnant with his child, but she suffered a miscarriage.

Trina has likewise dated a basketball player, Kenyon Martin, and a rapper, French Montana. She has openly admitted to being bisexual. In an interview with The Breakfast Club, she admitted to having relationships with both men and women.

As of 2022, Trina’s personal wealth is estimated to be around $8 million. She has been able to gather vast chunks of money through her successful rap career. Trina has likewise appeared as a main cast member on the reality show “Love & Hip Hop: Miami”.

Fetty Wap Net Worth: How Rich is the Rapper Actually in 2022?

Ace Hood Net Worth: How Rich is the Rapper Actually in 2022?