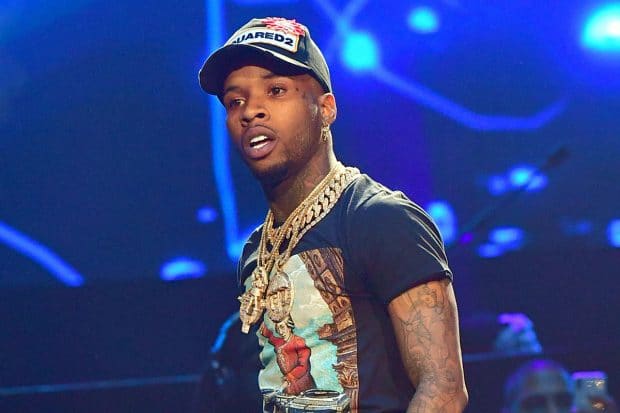 Daystar Shemuel Shua Peterson, better known as Tory Lanez is a 30 years old Canadian rapper. He claimed prominence after releasing the mixtape titled “Conflicts of My Soul: The 416 Story” in 2013. As of 2022, Tory Lanez net worth is estimate to be roughly $4 million.

Tory Lanez was born Daystar Samuel Shua Peterson on the 27th of July, 1992 in Brampton, Ontario, Canada. He was born to his parents, Sonstar and Luella. Tory has spent his childhood mostly in two places, Montreal and Miami, Florida. He has been interested in rap music from the beginning. Throughout his childhood, he has worked on refining his rapping skills.

Tory lost his mother at a young age, and after some time, his father married again. Later on, he along with his family shifted to the new place in Atlanta, Georgia. He started living on his own at 15. Tory has mentioned that he wasted his three years from 15 to 18 just fighting with random guys.

Lanez however got back to his musical dream again and started rapping using the moniker, Tory Lanez. He was studying in school when he was 16, but he dropped out of school at 10th grade to perform songs at outdoor concerts. Tory came up with his first mixtape titled “T.L 2 T.O.” in 2009. He directed some of his music videos and uploaded them on his YouTube channel.

You May Also Like:   Silkk the Shocker Net Worth: How Rich is the Rapper Actually?

Tory’s video got him to the notice of singer, Sean Kingston, who helped him to perform live on Justin Beiber’s tour. He dropped another mixtape “Just Landed, One Verse One Hearse, Playing for Keeps and Mr. 1 Verse Killah” in 2010. Following year, he signed a record deal with Kingston’s record label, Time is Money Entertainment.

However, Lanez left Kingston’s label after releasing the mixtape “Mr. Peterson, Chixtape, and Swavey”. He started working as an independent artist, and subsequently dropped the mixtape “Sincerely Tory, Conflicts of My Soul: The 416 Story” in 2013. Tory came up with his first song from his debut album titled “Say It” in July 2015. He then signed a record deal with Mad Love Records and Interscope Records.

By the end of 2015, he went on to release two mixtapes titled “Chixtape III”, and “The New Toronto”. He dropped his fifth album titled “Daystar” on September 25, 2020. It was his first project since he left the Interscope in 2019.

Tory Lanez is reportedly single at present time. In August 2020, a mysterious woman came up accusing Lanez that she was in an abusive relationship with him for around 9 months. Though, Lanez didn’t give any briefing on this matter.

Lanez was arrested and charged with concealing a weapon in his vehicle in July 2020. Police caught three people inside his car, which also include the rapper, Megan Thee Stallion. Megan was found to have a foot wound around that time, for which, she also underwent surgery. For some time, she kept quiet on the matter of who shot her.

You May Also Like:   Gillie Da Kid Net Worth: How Rich is the Rapper Actually in 2022?

But in August 2020, Megan confirmed that Lanez shot her, and voiced her opinions against Tory’s publicist team. However, Lanez kept on defending himself denying all the claims that Meghan has made against him. He also made multiple songs against Megan’s claim that he shot her.

As of 2022, Tory Lanez’s personal wealth is estimated to be around $4 million. He has made the whopping amount mostly from his music career and concert events. Besides his singing career, he has also founded the record label called One Umbrella in 2014.

Da Brat Net Worth: How Rich is the Rapper Actually in 2022?

Yak Gotti Net Worth: How Rich is the Rapper Actually in 2022?