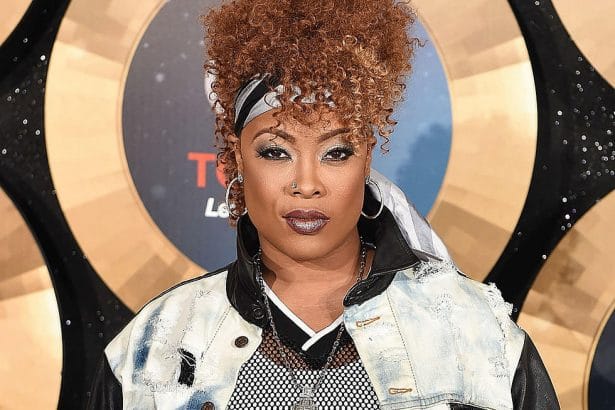 Shawntae Harris, better known as Da Brat is a 48 years old American rapper. She is best known as the first female solo rapper to receive a platinum certification for her first studio album “Funkdafied”. Brat’s lead song titled “Funkdafied” peaked at two-top ten hits on the list of Billboard Hot 100. As of 2022, Da Brat net worth is estimated to be around $3 million.

Da Brat was born Shawntae Harris on the 14th of April, 1974 in Chicago, Illinois, United States. She spent her childhood days growing up in the West Side district of Chicago. Brat was born to her parents, David Ray McCoy, and Beverly Calloway. Her father, David is a businessman, and her mother, Beverly is a city bus driver. She had spent her early days staying in two different households since her parents were never married.

Brat used to frequently attend the Apostolic church, and there, she used to sing in the choir. Regarding her education detail, she joined Kenwood Academy for her junior and sophomore year study. She had actively participated in the basketball games and she even ran in a track race. Bart came out holding a graduation degree from the Academy of Scholastic Achievement in 1992.

Brat participated in the local rap contest in 1992, and she eventually came out as the winner of the contest which was sponsored by Yo! MTV Raps. After winning the local contest, she got to meet the young hip hop duo, Kris Kross, who introduced her to music producer, Jermaine Dupri. She was later signed into his record label, So So Def Label. Brat took over the stage name as Da Brat by getting inspired by herself, who calls her a spoiled only child.

Brat released her first studio album titled “Funkdafied” in 1994. The album became a massive hit, which was certified platinum. In a short time, the album gets sold for one million copies, and with that, she became the first female solo rapper who sold 1 million copies. The lead song from the album “Funkdafied” peaked at the top spot on the rap singles chart, and the 6th spot on the Billboard Hot 100. Likewise, another song from the album titled “Give It 2 Your” peaked at the 26th spot on the Hot 100.

Da Brat came up with her second studio album titled Anuthatantrum” in 1996. The album includes the hit song titled “Ghetto Love” which features the singer, T-Boz of the American girl group, TLC. During the 1990s, she was noticed mostly for appearing in other rapper’s songs and albums.

In 1996, she made a contribution to the hip-hop remix version of Mariah Carey’s hit song “Always Be My Baby”. Likewise, she has appeared along with Dupri on Carey’s other hit song “Honey (So So Def Mix)”.

On April 11, 2000, she returned back to her solo work and released her third studio album titled “Unrestricted”. However, the album didn’t perceive well by the music lovers as compared to her previous albums. She dropped her fourth studio album titled “Limelite, Luv 7 Niteclubz” on July 15, 2003.

After two years, she made a comeback as a rapper on the remix of the song titled “I Think They Like Me” in 2005. On July 2, 2013, she dropped her new song “IS It Chu?”. Brat is currently working as a co-host of the “Rickey Smiley Morning Show”.

Da Brat is openly a lesbian, who is dating a hair product mogul, Jesseca Dupart. She confirmed her relationship with Jesseca on March 26, 2020. Brat and her lady love, Jesseca Dupart have recently started their new reality TV show “Brat Loves Judy”, which started premiering on WE TV on August 5, 2021. The reality show is one of the few TV shows that is made centering around the LGBTQ couple.

Brat has been arrested and sent to prison many times. She was found guilty in 2001 when she battered a woman with a rum bottle in an Atlanta nightclub. After the incident, she paid a $1000 fine and spent a year’s probation.

Likewise, she was arrested and sent to prison for three years and 7 years of probation after she stroke a nightclub hostess with a rum bottle again. Dupri announced on February 28, 2011, that she has got released from prison after completing her sentence.

As of 2022, Da Brat’s personal wealth is estimated to be around $3 million. She has gathered the majority of her income from her music career. Besides that, she has also appeared in a 1996 movie titled “Kazaam”.

Bobby Lytes Net Worth: How Rich is the Rapper Actually in 2022?

Tory Lanez Net Worth: How Rich is the Candian Rapper Actually in 2022?