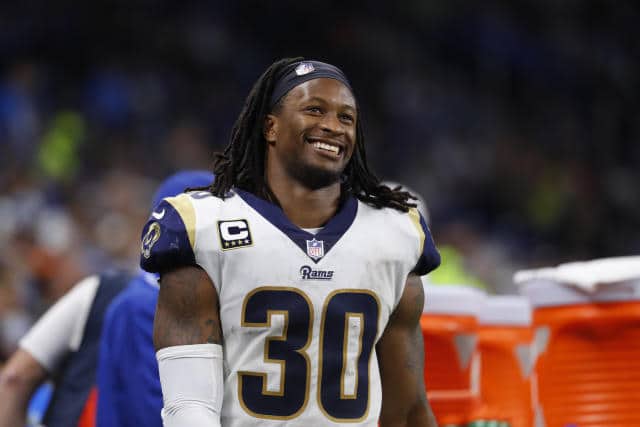 Todd Gurley is an American retired football running back. He is best known for playing in the NFL for six seasons. Previously, he earned ALL-SEC honors for two years in 2012 and 2013 while playing college football at Georgia. As of 2022, Todd Gurley net worth is roughly around $4 million.

Todd confirmed to NFL Networks’ Andrew Siciliano on Friday, October 21, that he is done playing football and said his NFL career is most definitely over.

Todd Gurley was born in August 1994, in Baltimore, Maryland. He was born to his biological parents Darlene Simmons and Todd Gerome Gurley. Todd has four half-siblings, one from his dad and three from his mom. He studied at Tarboro High School, where he played football, track, and basketball.

During his junior season, he played as a defensive back and running back for the Vikings. He made a total of 1,472 rushing yards, 26 touchdowns, 79 tackles, a forced fumble, and an interception. In 2011, he totaled 2,600 yards and 38 touchdowns and was named the North Carolina Associated Press Player of the Year. Likewise, he helped the Vikings Football team to get victory at the 2A North Carolina state Championships.

Todd also competed for Team USA at the 2011 World Youth Championships as a world-class hurdler and sprinter. He finished 15th overall and was placed 3rd in the prelims within 13.66 seconds, which was his career-best time. Likewise, he was also a top competitor in the 100-meter dash. Gurley was committed to playing college football at the University of Georgia. In the 2014 season, he finished with 123 carries for 911 rushing yards. After that, he decided to forego his senior season and made a decision to enter the 2015 NFL Draft.

Todd’s professional career began after he was selected in the 2015 NFL Draft by the St. Louis Rams. He made his NFL debut game in September 2015 against the Pittsburgh Steelers. In October 2015, he scored his first NFL touchdown. Gurley ended his rookie year with 10 touchdowns and 1,106 rushing yards. He was selected for the 2016 Pro Bowl in December 2015.

In April 2018, the Los Angeles Rams exercised the fifth-year option on his contract. The Rams extended his contract for four years, $60 million. In 2019, he suffered from lingering knee issues which contributed to his lesser production that year. Gurley finished the 2019 season with 12 rushing touchdowns and 857 rushing yards. He was released by the Rams in March 2020. Then, the Atlanta Falcons signed him for a one-year, $5.5 million contract in April 2020.

You May Also Like:   Hasbulla Magomedov Net Worth: How Rich is 'Mini Khabib' Actually?

Todd made his debut with the Falcons against the Seattle Seahawks in Week 1. As a Falcon, he had his first rushing touchdown and rushed 14 times for 56 yards. At the end of the 2020 season, he recorded 195 carries for 9 rushing touchdowns and 678 rushing yards. On October 21, 2022, Gurley confirmed to NFL Network’s Andrew Siciliano that he was done playing football and said that he was ending his NFL career.

Todd Gurley is currently dating an entrepreneur, Olivia Davison. His alleged girlfriend, Olivia runs an online clothing and accessory store, Liv Lively. Davison is also an alumnus of the University of Georgia, where they met for the first time. Gurley and Davison regularly share pictures of each other on their individual social media profiles. Gurley’s official Instagram account, @tq4hunnid currently has 1.6 million followers.

Jayson Williams Net Worth: How Rich is the Retired NBA Player?