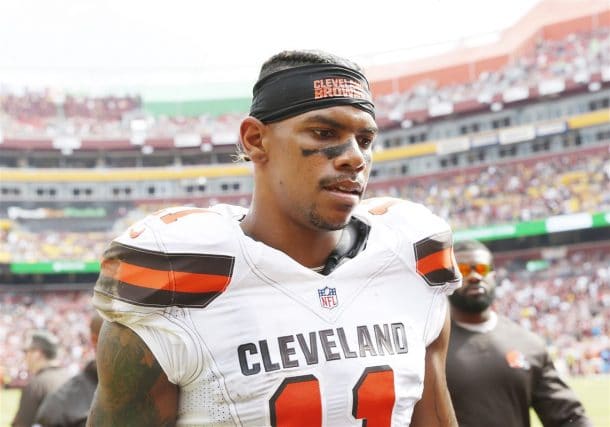 Terrelle Pryor Sr. is an American Football player who is currently a free agent. He has played for several teams in the NFL including Oakland Raiders, Seattle Seahawks, as well as the Cincinnati Bengals. As of 2022, Terrelle Pryor net worth is estimated to be around $8 million.

Pryor studied at Jeannette High School where he played both basketball and football. Since he dedicated a significant amount of time playing both sports, he became good at both and as a result used to play in top tournaments for both sports.

For the Class of 2008, Pryor was ranked to be among the top football recruits. Pryor continued to perform well in university as well but the problem was that he was getting into trouble outside the field. In 2010, he was accused for selling memorabilia which led to his suspension.

By 2011, Pryor made the decision to leave the university program and decided that the best thing he could do was to become part of the NFL’s Supplemental Draft.

Terrelle Pryor Net Worth and Career

You May Also Like:   Zack Martin Net Worth: How Rich is Cowboys' Offensive Guard?

Pryor’s athletic ability was amazing and so many NFL teams were interested in getting him into their teams. This led to him joining the Oakland Raiders as part of the draft. Looking at Pryor as a long-term asset, the team decided to sign him on a four-year deal.

After first finishing the suspension that he received during his time at Ohio State University, Pryor started to become a key member of the team and also became the holder of the record for the longest run by any player in the history of the Oakland Raiders.

However, his momentum was cut short by a severe injury that he got in his MCL which resulted in him missing several games. By the time he had recovered, he had to again start the fight of winning back his first-team position with there being competition by other top players.

In 2014, Pryor was traded to the Seattle Seahawks. However, he was released before the final roster was revealed. This was a time where teams were interested in his services but not completely sure of it considering his behavior outside the field.

In 2015, he signed a one-year contract with Kansas City Chiefs but was released that same year. The same happened with the Cincinnati Bengals too as he was released from the team within five weeks.

Pryor has since then been a part of the Washington Redskins where he had a lucrative $8 million deal for a year which was followed by stints with Buffalo Bills and Jacksonville Jaguars.

Pryor was previously in a relationship with Shalaya Briston but they later decided to break up. However, the ex-couple has still had a lot of drama since recently it was found out that Pryor had slapped Briston and even threw pumpkins at her car because of which he was arrested.

Among the deadly moments in his life came in 2019 for Pryor as that year he was stabbed in the neck and chest through Briston herself. Both of them were charged with assault by the police and as a result, Pryor was in a severe condition.

As of 2022, Terrelle Pryor has an estimated net worth of $8 Million. Pryor has done very well in his career financially since as per the data, he has been able to earn around $14 million before taxes and other fees.

Mac Jones Net Worth: How Rich is Patriots Quarterback Actually?