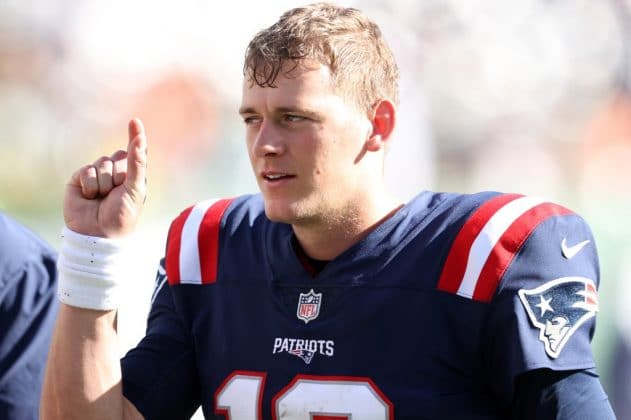 Michael McCorkle Jones, better known as Mac Jones is an American football quarterback. He is best known for playing in the National Football League (NFL) for the New England Patriots. Jones was selected by the professional football team, New England Patriots in the first round of the 2021 NFL Draft. As of 2022, Mac Jones net worth is summed up to be around $10 million.

Mac Jones was born Michael McCorkle Jones on the 5th of September, 1998 in Jacksonville, Florida, United States. He was born to his parents, Gordon and Holly Jones. Mac has two siblings; a brother Will and a sister, Sarah Jane. His brother, Will has played soccer at Mercer University, and his sister, Sarah has played tennis for the College of Charleston.

Jones started playing football when he was five. He continued to play football while studying at The Bolles School. Mac later attended the University of Alabama after receiving a scholarship. While playing in the 2017 season, he was charged with driving under the influence (DUI), and thus he was later suspended for the next game against LSU Football Tiger.

Mac began his professional football career in 2021 after he was picked by the New England Patriots in the first round of the 2021 NFL Draft. On July 6, 2021, he signed a four-year rookie contract with the Patriots. Mac was named the Patriots’ starter for Week 1 after the 2021 preseason. In his NFL debut, he faced the Miami Dolphin. Mac made the highest completion percentage in his NFL rookie debut which was 74.4.

Mac got his first career victory against the New York Jets with a score of 25-6. In the match, he completed 22 of 30 passes with a completion rate of 73.3. With that, he became the first rookie quarterback to cover 70% of 60 passes in his first two starting games.

Jones went against Tom Brady’s team, Tampa Bay Buccaneers on October 4, 2021. In his debut Sunday Night Football game, he completed 31 of 40 passes for 275 yards. He was outstanding in the game, however, despite his exceptional performance, his team lost to Buccaneers with a score of 17-19.

Mac Jones is currently dating a physical therapist, Sophie Scott. His girlfriend, Sophie is also a model and influencer who regularly posts about her everyday lifestyle and travel stories on Instagram. Mac and Sophie started dating while they both attended Alabama, and they came as a couple publicly in September 2019.

You May Also Like:   Maya Moore Net Worth: How Rich is the WNBA Player Actually?

As of 2022, Mac Jones’ personal wealth is estimated to be around $10 million. He has gathered the hefty sum through his professional football career. Mac was signed by the New England Patriots for $15.6 million on July 6, 2021.

Terrelle Pryor Net Worth: How Rich is the NFL Player Actually?

LeSean McCoy Net Worth: How Rich is the NFL Player Actually?