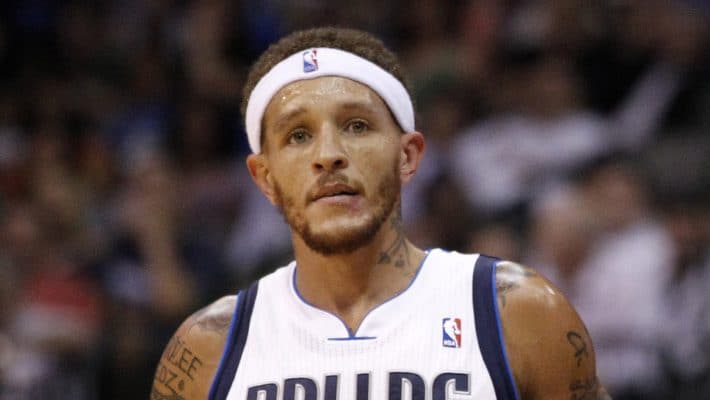 Delonte Maurice West is a former American professional basketball player who used to play in the NBA. During his career, West managed to play for five different teams there and later on was also part of the Chinese Basketball Association. As of 2022, Delonte West net worth is estimated to be around $1,000.

West studied at Eleanor Roosevelt High School during which he started to play basketball and got good at it over the years. As part of their school team called Roosevelt Raiders, he managed to help the team in winning several tournaments and was even named as Washington Post All-Met Basketball Player of the Year.

Delonte West Net Worth and Career

He then joined Saint Joseph’s University where his performances were impressive while participating in the NCAA Tournament. However, he decided to leave during his junior year since he was selected in the 2004 NBA Draft by Boston Celtics.

However, West couldn’t make the kind of impact that he would have wanted as he faced several injuries one after another. Still, he managed to get playing time coming off from the bench. In the next season as he had recovered well, he was able to make his place in the first team.

You May Also Like:   Tyron Woodley Net Worth: How Rich is the Retired MMA Fighter?

After a couple of seasons with the Celtics, he would be traded to the Cleveland Cavaliers. He signed a lucrative deal worth close to $13 million over three years with the Cavaliers and started to play in the shooting guard position.

In 2013, he decided to leave the Texas Legends to play for Fujian Xunxing which was a team based in China for a one year deal. Many thought at this time that West had now been over the peak of his career.

He also played for Shanghai Sharks in 2014 after signing another one-year deal. He then made a comeback to Texas Legends for a year after which he was waived after suffering from a serious injury.

West’s first marriage ended in divorce after which he married Caressa Madden with whom he has two sons.

As of 2022, Delonte West has an estimated net worth of $1000. In the span of his basketball career, West managed to earn millions of dollars. However, poor financial decisions along with a divorce that involved splitting his fortune and legal fees would lead to his downfall.

But no one expected that his financial situation would get so bad that he had to apply for a job at Home Depot in 2011 after the NBA went into lockout. In 2016, West seemed to hit rock bottom after a photo started circulating in social media where West was seen barefoot and in a hospital gown with many believing that West was panhandling.

You May Also Like:   Dikembe Mutombo Net Worth: How Rich is the NBA Legend?

At the time, West clarified these rumors and explained that he was simply helped a homeless person. But again four years later, a video would surface on social media where he was seen being beaten up in Washington D.C.

Now fans were clear that he was indeed panhandling in Texas. Mark Cuban who is the owner of Dallas Mavericks saw this and decided to pick West up from a gas station. Cuban helped West by sending him to a drug rehabilitation treatment and also provided him with accommodation. In 2021, West is now recovering and is also working in the rehab facility itself.

Glen Davis Net Worth: How Rich is Big Baby Davis Actually in 2022?

Terrelle Pryor Net Worth: How Rich is the NFL Player Actually?