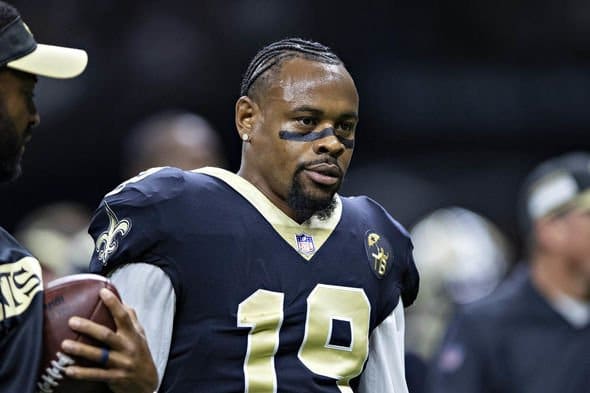 Ted Ginn Jr. is a retired American football wide receiver. He is best known for playing in the National Football League (NFL) for 14 seasons. Ted was playing with Chicago Bears until he announced his retirement from professional football on July 16, 2021. As of 2022, Ted Ginn Jr net worth is estimated to be around $15 million.

Ted Ginn Jr. was born on the 12th of April, 1985 in Cleveland, Ohio, United States. He has played under his father, Tedd Ginn Sr.’s guidance, who is the coach of the Glenville High School. Ted has played as a wide receiver, defensive back, and quarterback for his high school team. From the beginning, he has excelled in football. In fact, he was named Most Valuable Player while playing in the U. S. Army All-American Bowl.

Ted also competed in the track and field as a part of the Glenville track team. He has set the record of the best time as a senior while grabbing the state title in the 200 meters. Ted was able to complete the track in 21.51 seconds. He was about to compete in the 2008 Summer Olympics, however, later his track athletic career was put on hold as he started to excel more in football.

Ginn started playing as a defensive quarterback for the Ohio State University. While playing for the 2004 season, he made 25 receptions for 359 yards. In his freshman season, he helped his team to get victory over Indiana with 30-7. In his sophomore year, he started playing as a wide receiver, and later, he was named a starter.

You May Also Like:   Christy Martin Net Worth: How Rich is the Former Boxer Actually?

Ted played along with Ohio State till 2006 season, where he made 125 receptions in 37 games. He began his professional career in 2007 after getting picked up by the Miami Dolphins in the 2007 NFL Draft. Dolphins received a lot of criticism for selecting Ginn instead of Brady Quinn. Ginn entered the football ground wearing #19 for the Dolphins in the 2007 season against the New York Giants. He made his first career touchdown return while playing against the Philadelphia Eagles.

In the 2008 season, he started playing as a starting wide receiver. In the starting season, he made 2 receptions for 17 yards. Ted excelled in his performance while playing against the Buffalo Bills, where he made 7 receptions. He ended the 2008 season with 56 catches for 2 touchdowns and 790 yards. In the 2009 season, he had 1826 all-purpose yards.

Ted played with the Carolina Panthers in the 2013 season, and the following year, he signed a 3-year deal with the new team, Arizona Cardinals. Along with the Panthers in the 2015 season, he made 35 receptions in the first 12 games. Ted signed 3 year deal with New Orleans Saints on March 9, 2017. After a year, he had an injury on the knee due to which he was placed on injured reserve on October 18, 2018.

Gin was signed with the Chicago Bears on May 4, 2020. He was placed as a replacement for Tarik Cohen in a Week 3 game against the team Atlanta Falcons. Gin played as a punt returner from Week 4 to Week 7, and then he was released by the Chicago Bears on November 4, 2020. Gin made an announcement of his retirement from professional football on July 16, 2021, after playing for 14 seasons.

Ted Ginn Jr. is married to Krystal McCoy since April 12, 2015. He tied the knot with Krystal after having a love affair with her for over ten years since 2002. The pair shares twins named Theodore Ginn III, and Krysten Lee Ginn, who was born in 2010.

Shohei Ohtani Net Worth: How Rich is the Baseball Pitcher Actually?

Baron Corbin Net Worth: How Rich is the WWE Star Actually?