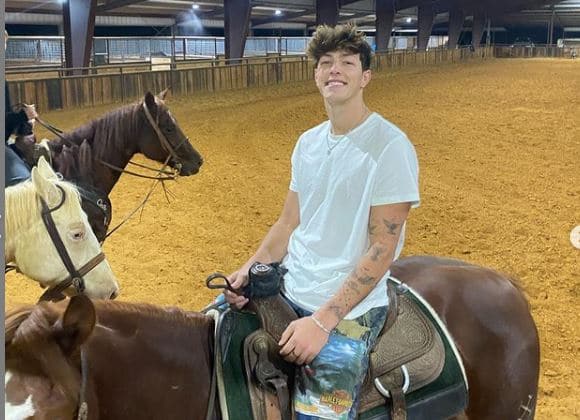 Tayler Holder is a social media personality, actor, and aspiring singer. He is best known as a TikTok star where he has over 19 million followers. Holder has starred as Luke in the Brat series called Dirt in 2018. As of 2022, Tayler Holder net worth is estimated to be $2 million.

Tayler Holder was born on August 19, 1997, in the small city of Alvarado in Texas. Though Holder has kept his story growing up private, it is well known that he developed an interest in racing early on. As he grew up, he also participated in different motocross competitions. After turning 18, Holder moved to Los Angeles, California to head towards his dreams.

Tayler Holder Net Worth and Rise to Fame

He is today known as one of the most known influencers on the platform with over 19 million followers. He was also a member of the Hype House which was a collective group of TikTok influencers who lived together in a house and created content. His presence there definitely helped to grow his following but eventually, Holder decided to part ways with the group.

In a video he created on Youtube, Holder explained that his reasons for leaving were not personal yet because of technicalities such as lack of a good working condition in the house. He also hinted that he wanted to start his own content compound where creators could come together for videos that would be known as Triller Compound in 2020.

His appearance as Luke in Dirt has one of his known works as an actor where he played the role of a motocross racer. Yet, Holder has mentioned how he sees his future as a singer. He wants to be known foremost as a singer and plays many instruments too. In 2021, he released his first major single called “100 Rounds” which also had a music video with Jason Derulo.

Holder was in a relationship with Charly Jordan throughout 2020. However, things didn’t work out between the two of them and in 2021, they made it public in a Youtube video about their breakup. Holder mentioned how the two of them are in different directions in their lives but ended their relationship on good terms. Holder has two siblings which include his brother, Trevor, and an adopted sister, Abby.

As of 2022, Tayler Holder’s net worth is estimated to already be $2 million. With millions of followers on multiple platforms, Holder has earned through brand partnerships in his videos. Holder is even going to be part of the Youtubers vs. TikTokers boxing event where he is scheduled to fight British Youtube star AnEsonGib which would surely help him add to his growing net worth.

Amelia Hamlin Net Worth: How Rich is Scott Disick’s Girlfriend?

Bramty Juliette Net Worth: How Rich is the YouTuber Actually?