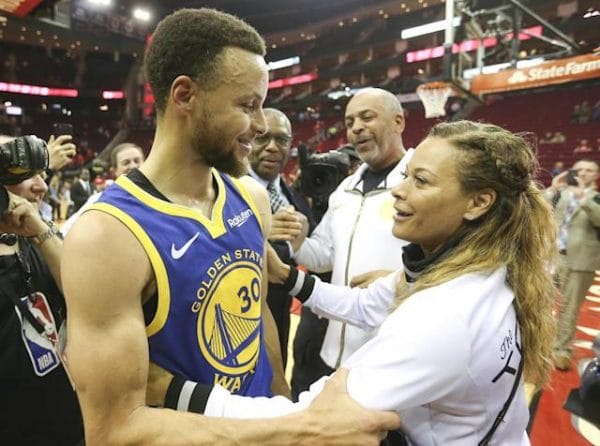 Sonya Curry is an American educator, who is best known as the mother of professional basketball players, Stephen and Seth Curry. Curry is also the wife of a former basketball player, Dell Curry. She and her husband, Dell, has recently announced their divorce news on August 23, 2021. As of 2022, Sonya Curry net worth is estimated to be around $6 million.

Sonya Curry was born on the 30th of May, 1966 in Radford, Virginia, United States. She was born to her parents, Cleive and Candy Adams. Sonya grew up in extreme poverty. She also faced racist experiences with the white supremacist terrorist hate group, Ku Klux Klan.

Sonya has played different sports while studying in high school. She was excellent at basketball, volleyball, and track and field. After completing high school, she joined Virginia Tech University. She attended the University as a student-athlete. Sonya actively played volleyball with the University’s Volleyball team. As a junior volleyball player, she received all-conference honors in the Metro Conference.

Sonya was the most popular among other team members. Due to her presence, the volleyball team became more popular. She came out holding a University degree in Education. Curry’s brief work experience is still unknown. In 1995, she founded a preschool, the Christian Montessori School of Lake Norman. She also stands as the president of the school.

You May Also Like:   Top 20 Richest Authors Ranked by Their Net Worth 2022

Curry has been in the news mostly because of her two sons, Stephen and Seth. She started being a favorite shot for the college basketball television producers when her eldest son, Stephen was playing in the 2008 NCAA Tournament. Likewise, she trended on Twitter in February 2013, after she made a celebration on her youngest son, Seth’s three-point field goal. She continued to shine on the internet in the 2013 NCAA Tournament during the Blue Devil’s run.

Sonya has often been described as royalty in the NBA as she mostly receives camera time in the audience of Golden State games. She has been interviewed many times on how she managed to successfully raise two professional athletes. Her eldest son, Stephen has been the two-time NBA Most Valuable Player.

Curry’s two sons, Stephen and Seth came face to face in the NBA Conference Finals in 2019. After their face-off, they became the first brothers ever to compete against each other in the NBA Conference Trials. Curry has always stayed along with her son’s journey watching their games from the stands.

Sonya Curry is married to retired professional basketball player, Dell Curry. Dell and Sonya, both have studied at Virginia Tech University. The pair came into each other’s notice when she went on an official recruiting visit to the school. During that time, she saw Dell first time where he was practicing with his teammates.

Sonya and Dell have reportedly decided to call off their 33 years of marriage. Sonya announced on August 23, 2021, that she and Dell are filing for divorce. As per sources, the pair have been living separately for a long time, and Sonya filed for divorce in North Carolina in June.

As of 2022, Sonya Curry’s personal wealth is estimated to be around $6 million. On the other hand, her former husband, Dell Curry holds a huge net worth amount of $8 million. Sonya’s eldest son, Stephen Curry owns a £23.5 million three-story mansion in the Bay Area community.