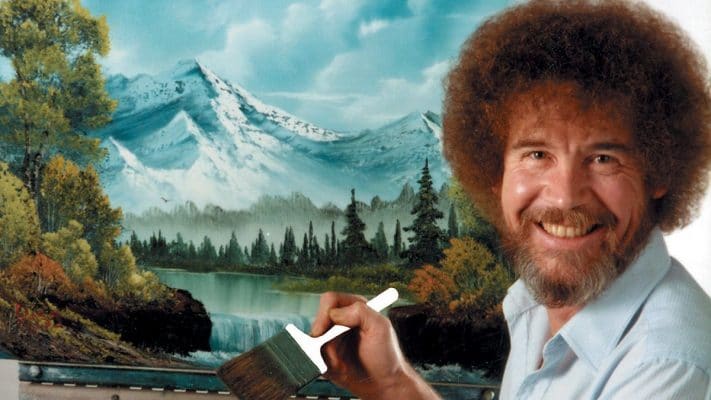 Robert Norman Ross, who was better known as Bob Ross, was an American painter and television personality. He was best known for hosting the show called The Joy of Painting which was a hit show that aired for 11 years around the country and became known for its instructional style towards arts. As of 2022, Bob Ross net worth is estimated to be around $1 million.

Ross had an interest in art from a young age including a love for taking care of animals. However, he didn’t enjoy high school very much and dropped out when he was still in the 9th grade. Once Ross turned 18 years old, he decided to become part of the United States Air Force where he initially started working as a medical records technician.

Over the years, Ross turned from a boy into a man where he learned a lot while coming of age. He would later be promoted to the rank of first sergeant while being stationed in Alaska. It was also during this time that Ross was developing his painting ability too.

Bob Ross Net Worth and Career

Ross and his interest in art grew even more after attending some art classes which made him get even deeper into the craft. He even started to watch shows such as The Magic of Oil Painting which he found to be very inspirational and kept him wanting to explore new painting techniques.

Over the years, Ross would continue painting while still holding his job in the military. Eventually, there came a point where his paintings started to earn him more than the salary he got as part of the Air Force. It was thus in 1981 that Ross decided to retire from Air Force and focus more on vocations related to art. Two years later in 1983, Ross developed a show called The Joy of Painting which was inspired by his own experience of watching such types of shows growing up.

The show focused on Ross instructing on creating wet oil painting techniques. The popularity of the show grew overtime over the years. Bob Ross in itself started to become a brand that included teaching classes as well as selling art supplies.

Ross created more than 30,000 paintings during his career with some of his paintings being sold more as much as $10,000. His paintings were especially focused on wet oil painting techniques. He has cited personalities such as Bill Alexander to be important figures who have inspired him as a painter. However, their relationship together would have some rough patches.

Ross also released a book called The Best of the Joy of Painting with Bob Ross for which he participated in different live shows for promoting his work.

Ross had a total of three marriages during his life that led to two children. His first marriage was with Vivian Ridge but their relationship ended in 1977. Ross was to blame for this as he was seen to be in an affair with another woman. His son Steve Ross is also a painter.

You May Also Like:   Karlie Redd Net Worth: How Rich is 'Love & Hip Hop: Atlanta' Star?

He then married Jane but she sadly passed away because of cancer. Ross was then married to Lynda brown just two months before he passed away. Ross had several health problems with him being a chain-smoker that led to his death when he was only 52 years old in 1995 because of lymphoma.

Erin Andrews Net Worth: How Rich is the Sportscaster Actually?

Kat Von D Net Worth: How Rich is the Tattoo Artist Actually?