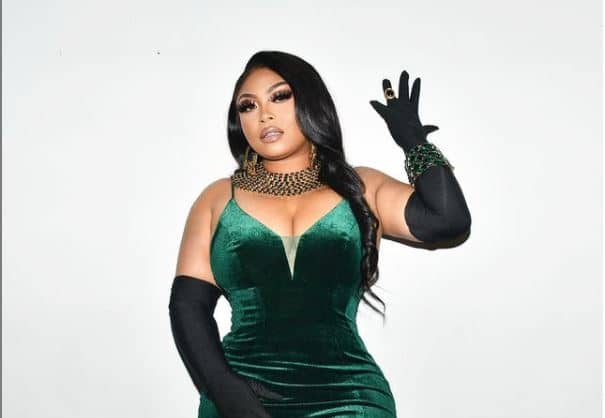 Shekinah Anderson is an American professional hairstylist and reality TV personality. She is best recognized for appearing as the best friend of R&B singer, Tiny Harris on VH1’s reality shows “T. I. & Tiny: The Family Hustle”, and “Tiny & Shekinah’s Weave Trip”. Shekinah is also known for appearing as a supporting cast member on the 8th season of the reality series “Love & Hip Hop: Atlanta”. As of 2022, Shekinah Anderson net worth is estimated to be around $200 thousand.

Shekinah Anderson was born on 31st May 1984 in Atlanta, Georgia, United States. She was born to her parents, James, and Sonya. Shekinah has a sister. Both of them were raised by her mother and stepfather. She had a passion for hairstyling since she was a small kid.

At 12, she started styling the hairs of her family members and friends. Shekinah later earned a Certificate from Platinum Hair Salon. She also managed to bear all education costs while studying at Empire Beauty School.

Shekinah is most probably known for her appearance on the VH1’s reality series “T. I. & Tiny: The Family Hustle”. She came into the limelight in the show for appearing as a best friend of R&B singer, Tiny Harris. Shekinah also appeared in another reality series called “Tiny & Shekinah’s Weave Trip”. Her bond with Tiny was loved by the audience. However, later on, she ended her longtime friendship with her.

Shekinah and Tiny have also unfollowed each other on Instagram. She lashed out at her best friend Tiny after many sexual abuse cases showed up against Tiny, and her hubby, T. I. Tiny, and T. I. were accused of giving drugs to people, and sexually assaulting them. Earlier, she made an accusation on Sabrina Peterson, claiming that she is responsible for recruiting women for Tiny, and T. I. However, after some time she withdrew the claim saying that she made the allegations out of hurt.

Shekinah showed up in the reality series as a longtime friend of the cast members, Karlie Redd, Rasheeda, Sierra, Tokyo Vanity, and Che Mack. She even had a feud with Akbar V, after coming to know that both have dealt with the same man.

Shekinah Anderson’s current relationship status is not known. However, Shekinah has revealed that she had gone through two abortions in the past. She made the decision to abort the pregnancy because she felt that she was not ready to take the responsibilities as a mother. She was also quite young when she became pregnant. Shekinah doesn’t have any regret either being pregnant or aborting her unborn kids.

As of 2022, Shekinah Anderson’s net worth is estimated to be around $200 thousand. She has made most of her income through working as a hairstylist for celebrities and appearing in few reality series. Besides that, she has also earned a reasonable amount from her endorsement deals and promotions on social media. In fact, she has promoted popular brands like Faces & Faces, J Contour Waist, and Lulu Mattress.

You May Also Like:   Jeff Franklin Net Worth: How Rich is the Full House Creator Actually?

Jackie Collins Net Worth: How Rich was the Novelist Actually?

Rick Leventhal Net Worth: How Rich is Kelly Dodd’s Husband?