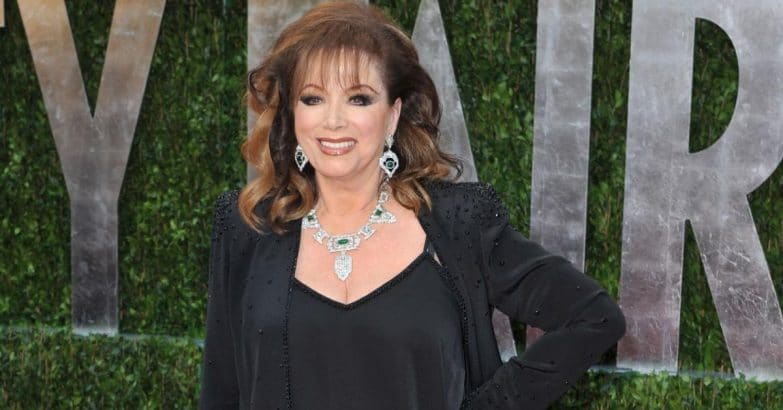 Jacqueline Jill Collins, better known as Jackie Collins was a famous English romance novelist, and actress. She has written 32 novels, and all of her novels have been on the bestsellers list of The New York Times. Jackie’s eight novels have been adapted for the movies, and TV miniseries, where she wrote screenplays for a handful of those. As of 2022, Jackie Collins net worth at the time of her death was around $180 million.

Jackie Collins was born on the 4th of October, 1937 in Hampstead, London. She was born to her parents, Joseph William Collins, and Elsa Collins. Her father, Joseph William was a theatrical agent.

She grew up with her two siblings; an elder sister, Joan, and a younger brother, Bill. For her study, she joined an independent day school girl, Francis Holland School. At 15 years of age, she was expelled from the school.

Jackie started off her career by appearing in a series of British B movies during the 1950s. Later, she was sent to Los Angeles by her parents to live with her sister, Joan, who is an actress. With the help of her sister, she started appearing in small roles in low-budget movies such as “Barnacle Bill”, “The Safecracker”, “Rock You Sinners”, and “The Shakedown”. However, she decided to discontinue her career as an actress after appearing in the TV series “Danger Man”, and “The Saint”.

You May Also Like:   Top 20 Richest Comedians Ranked by Their Net Worth 2022

Jackie was 18 at the time when she decided to focus on writing, and thus she went back to England. She went to publish her first book titled “The World Is Full of Married Men” in 1968. Though her first book became the best-selling book, she received a negative comment from Barbara Cartland, who called the book nasty, filthy, and disgusting. The book was later banned in two countries; South Africa, and Australia, which badly impacted the sales in U. S., and the U. K.

Jackie published her second novel “The Stud” in 1969, which was included in the bestseller lists. In 1971, she published her third novel titled “Sunday Simmons & Charlie Brick”. Besides writing books, she was also writing the screenplay for the movies, and TV series, which was made based on her book. She has written the screenplay for the movies “The Stud”, and “The World Is Full of Married Men”.

Jackie then continued to follow her passion and went on to publish few other books. She had the busiest schedules as a writer in the 2000s, where she published eight 8 best-sellers. She published her new novel titled “Hollywood Wives: The New Generation” in 2001, which was later adapted as a TV movie in 2003. Collins also showed up as a host of a series of TV specials in 2004, such as “Jackie Collins Presents”.

Jackie Collins was married two times in her life. She first tied the knot with Wallace Austin in 1960, with whom, she separated with divorce in 1964. After a year of separation, Austin died of a drug overdose. She had a daughter, Tracy with Austin.

You May Also Like:   Lesa Milan Net Worth: How Rich is the RHODubai Star Actually?

She then married Oscar Lerman in 1965. Jackie shared two daughters named Tiffany, and Rory with him. Her second husband, Oscar died from prostate cancer in 1992. Collins was engaged to business executive, Frank Calcagnini in 1994. However, they didn’t turn into a married couple as Frank died of a brain tumor in 1998.

Jackie Collins’s net worth before her death is estimated to be around $180 million. She had a large mansion in Beverly Hills, which she purchased for $2 million in 1988. Later in the 1990s, she completed destroyed the former structure of the mansion, and build a large 22,000 square-foot mansion. The house was listed for sale for a whopping $30 million after a year of her death. However, a month later, a $21 million offer was accepted.

Shekinah Anderson Net Worth: How Rich is Shekinah Actually?