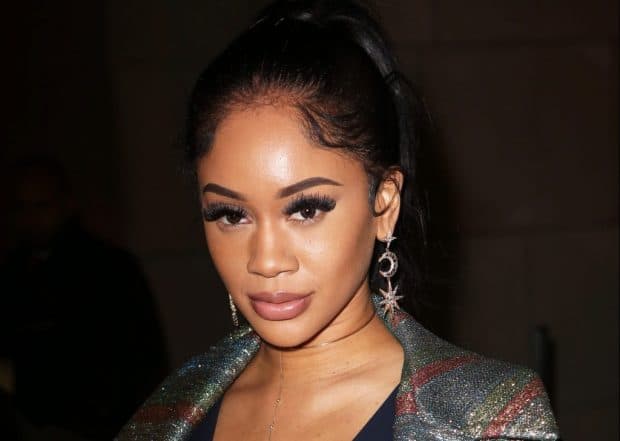 Saweetie is an American rapper best known in the music business for her hit singles “Icy Girl” and “My Type”. Saweetie is going to release her first album “Pretty Bitch Music” soon in 2021. As of 2022, Saweetie net worth is estimated to be around $4.5 million.

Saweetie stepped into this world on July 2, 1993, in Hayward, California, United States. Her real name is Diamonte Quiava Valentin Harper. She belongs of mixed ethnicity as her father, Johnny Harper is an African-American and her mother, Trinidad Valentin is a Filipina-Chinese. She spends her childhood days growing up in Central Valley.

Regarding her educational background, Saweetie initially studied at Merrill F. West High School. After some years, she joined Monterey Trail High School from where she held her graduation degree. Following that, she studied communications and business at San Diego State University. Later, she joined the University of Southern California from where she held a graduation degree majoring in communications.

Saweetie was interested in poetry earlier, where she used to perform at open mic on-stage. That led her to discover a passion for music later. Saweetie became more interested in rapping after she completed her University education.

Saweetie Net Worth and Career in Music

In 2017, she released her first single titled “Icy Girl” on SoundCloud. The song started getting viral all over the internet. She also gained the attention of A&R Executive and producer Max Gousse, who later handled upcoming projects as a manager. Her first blockbuster song has generated 116 million views as of March 2021.

You May Also Like:   Burna Boy Net Worth, Height, Bio, and Girlfriend

Soon after the song became viral, she released another freestyle rap version “High Maintenance” which went viral on Twitter and Instagram. In February 2018, she was signed by two record labels; Warner Bros. Records and Artistry Worldwide.

On March 16, 2018, she came up with her first EP titled “High Maintenance” which includes a total of nine tracks. One of the songs titled “Icy Girl” from EP received wide appreciation from the audience. In June 2018, it was certified Gold.

Saweetie became successful to create some magic with her second EP titled “Icy”, which was released on March 29, 2019. The first song from EP titled “My Type” became a big hit which was peaked at Number 21 on Billboard Hot 100. The song was certified double platinum in U. S.

The rising rapper, Saweetie is all set to raise the career bar with her debut album “Pretty Bitch Music” which will be releasing in 2021. The lead song titled “Tap In” from the album was released on June 20, 2020. It became a massive hit that ranked at 20th spot on Billboard Hot 100.

Saweetie released her second song titled “Back to the Streets” on October 23, 2020. The third song titled “Best Friend” was released on January 7, 2021. To date, the song has generated 90 million views.

Saweetie currently stands at a height of 5 feet 7 inches or 170 cm tall and weighs around 55 kg or 121 pounds. Her body measurements are 34-26-36 inches. Likewise, she has blonde hair and has a pair of dark brown eyes. Her shoe size and dress size are 6 (US) and 4 (US) respectively.

You May Also Like:   Roddy Ricch Net Worth: How Rich is the Rapper?

Who is Saweetie’s Boyfriend?

Saweetie has recently broken up with the famous rapper, Quavo. She has been dating him since 2018. Saweetie announced her break-up story through Twitter sharing a tweet as “I’m Single”. She mentioned that she has gone through too much betrayal and hurt because of the false narrative story that is circulating around which has degraded her character as well.

Recently she appeared on the podcast, Respectfully Justin where she gave a hint of being lied to by Quavo while she was in a relationship with him. Since their breakup, both celebrities have unfollowed each other on Instagram.

Starting 2022, Saweetie’s personal wealth is estimated to be around $4.5 million. She has earned a huge amount from her successful music career.

PnB Rock Net Worth: How Much is PnB Rock Worth Actually?