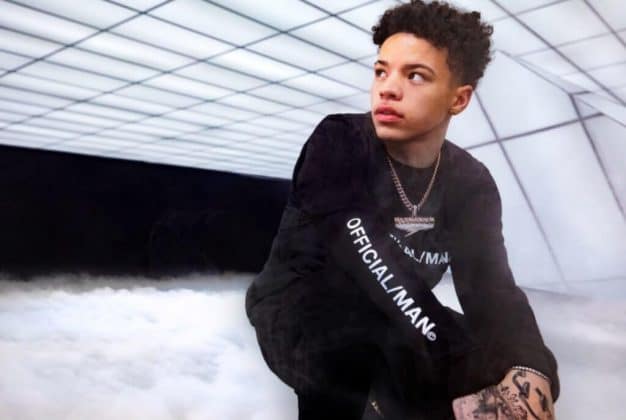 Lathan Echols better known as Lil Mosey is 20 years old rapper and hip-hop recording artist. He is best known for his hit songs “Pull Up”, “Noticed” and “Blueberry Faygo”. Lil is recently in limelight for rape accusations by two women. An arrest warrant has been issued for his custody after he failed to appear in the first hearing in the court. As of 2022, Lil Mosey net worth is estimated to be roughly $3 million.

Lil Mosey was born Lathan Echols on January 25, 2002, in Mountlake Terrace, Washington, United States. He was born to a white mother and a half-black father. Lil was raised by his single mother. He started singing while studying in 8th grade. Lil was rapping since his early teen days.

Regarding his education, he completed his high school education at Mountlake Terrace High School. He studied there up to 9th grade. Lil later joined Shorecrest High School in 10th grade. He wanted to drop out of school, however, his mother was not allowing him to do so. So, he made a deal with his mother, if his first music video would cross 30K in 3 days, he would leave school.

Though the music video met the goal, his mother didn’t allow him to left the school. However, he sticks with his decision and eventually dropped out of school in 10th grade. Lil uploaded his first single “So Bad” on SoundCloud in 2016. The song quickly received 50,000 views. His first commercial single “Pull Up” hit the floor in December 2017. The music video has over 35 million YouTube views as of this writing.

He released another commercial song “Boof Pack” on March 14, 2018. To date, the music video has garnered more than 16 million YouTube views. Lil dropped his first studio album titled “Northbest” on October 19, 2018. The album includes the hit song “Noticed”, which made its place secure on Billboard Hot 100.

Lil released his second studio album “Certified Hitmaker” on November 8, 2019. The song, Blueberry Faygo, became the highest-peaking single on Billboard Hot 100. In fact, the song peaked at the 8th spot on Billboard 100. His recent song “Try Me” was released on March 16, 2021. The official music video of the song has received over 4.8 million YouTube views.

Lil Mosey is actually not that tall. He stands at a height of 5 feet 6 inches or 1.68 m tall and weighs around 65 kg or 143 pounds. His chest size, waist size, and arms size are not available at the moment. Likewise, his eye color and hair color are both dark brown. Mosey also has a tattoo on his right arm that reads “Loyalty”. He also has a tattoo on his chest with the name “Thank God”.

Lil Mosey was rumored to be dating TikTok star, Dixie D’Amelio in 2020. The pair was taken as a new love couple after they were spotted having a private dinner. Lil had a lot of talk with Dixie during the dinner. He even clicks pictures with her and made few TikTok videos. However, both never confirmed their relationship.

Lil recently fell into a controversy as he was charged with second-degree rape on April 2, 2021, for getting engaged in sexual intercourse with two women at a party he hosted on January 5, 2021. He was about to appear in his first hearing on April 21, but he was not present on that date. Due to his absence, an arrest warrant has been issued against him.

If he is found guilty, he would be either sent to prison for 78 to 102 months or life imprisonment. Likewise, he would be charged a maximum penalty of $50,000 fine.

Lil Mosey has amassed an enormous fortune of roughly $3 million by 2022. He has gathered a vast chunk of money from his music album sales. His net worth and music career would get surely get hampered if he is found guilty on rape charges.

Baby Smoove Net Worth: How Rich is the Rapper Actually in 2022?