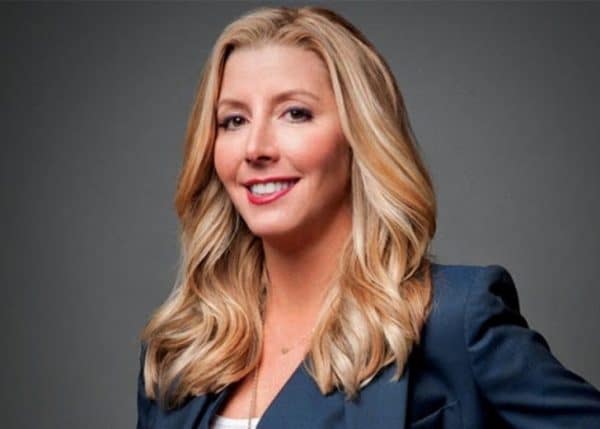 Sara Treleaven Blakely is an American entrepreneur and philanthropist who founded the intimate apparel company called Spanx which is known all over the world for its comfy leggings and variety of pants. Sara has been considered to be among the 100 most powerful women in the world by Forbes. As of 2022, Sara Blakely net worth is estimated to be around $1.2 billion.

Sara studied at Clearwater High School after which she attended Florida State University where she got her degree in communications.

Sara Blakely Net Worth and Career

After completing her education, Sara had thought about becoming an attorney but she scored very low on the law school test, she decided to start working at Walk Disney World. During this time, she was also doing stand-up comedy too.

Later on, she started to work for a company called Danka which sold fax machines. She worked in sales there and because of her skills, she managed to become a national sales trainer by the time she was only 25. It was on the job that she faced the problem of having to wear pantyhose in hot temperatures which were very uncomfortable.

As a result, she did some experiments on her clothing to get rid of her pain points. She came up with an idea where she continued working on while still employed at Danka. Over the two years, she was able to develop her idea and filed a patent for it too. The name of her trademark would be Spanx.

Sara then started to pitch her products to different groups among which the Neiman Marcus Group was among the first ones to take note of her innovative product and its potential. Soon word started getting out about Spanx. Among the tipping points for the business came in 2000 when Oprah Winfrey strongly recommended the product as part of her favorite things.

This instantly skyrocketed the sales of Spanx which led to it signing numerous lucrative deals. By 2012, Sara had made history by becoming the youngest ever self-made female billionaire globally. It was after this that the personal brand Sara also grew with the world recognizing her entrepreneurial abilities.

Over the years, Spanx has faced a lot of competition with brands such as Shapermint coming into the picture and taking a significant share of the market. Furthermore, there is also the brand called Honeylove which has received funding from different VC firms as well as the brand called Skims which is started by Kim Kardashian and is valued at over $1.6 billion.

Sara is married to Jesse Itzler who is the owner of Marquis Jet. After meeting through a Net Jet Poker Tournament, they started dating and would decide to marry in 2008. Together, the couple has four children. Along with her husband, Sara also has a stake in the Atlanta Hawks.

You May Also Like:   Scott Cawthon Net Worth: How Rich is the Video Game Developer?

As of 2022, Sara Blakely has an estimated net worth of $1.2 billion. After reaching billionaire status a couple of years ago, Sara’s net worth had fallen during the pandemic because of the massive decrease in sales of the company that decreased their market capitalization.

However, in 2021, Sara announced to sell a majority stake of her business to the private equity group called Blackstone which has increased the value of her company to well over a billion dollars again. Sara has still managed to maintain a significant equity stake in the company and will be serving as its chairperson.

Armando Montelongo Net Worth: How Rich is the Entrepreneur Actually?

Steve Banerjee Net Worth: How Rich was the founder of Chippendales?