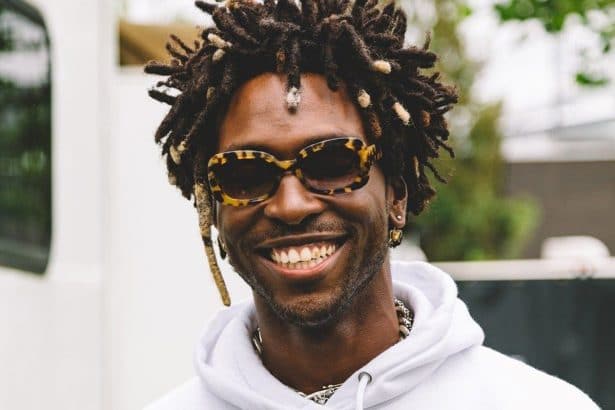 Carlos St. John Phillips, better known as Saint JHN is a Guyanese-American rapper and songwriter. He is best known for his hit song “Roses”, which was released in 2016. Saint is also known for being a founding member of the music collective, Godd Complexx. As of 2022, Saint JHN net worth is estimated to be around $3 million.

Saint JHN was born Carlos St. John Phillips on 26th August 1986 in Brooklyn, New York, United States. He grew up in Georgetown, Guyana, and has lived 3 years of his early life between Guyana and East New York in Brooklyn. He was raised by his mother, who was a preacher. Saint grew up in poor financial conditions, and to overcome poverty he even sold drugs.

Regarding his education, he initially studied at a Guyana-based high school, and later, competed high school from Brooklyn-based South Shore High School. He started making music at 12 years of age. Saint was actually inspired by his brother, who was much into rap. He prepared his first song while studying in the first year of high school based in Guyana.

Saint earlier wrote and performed the songs using his real name. He released his first EP titled “The St. John Portfolio” in 2010. The same year, he came with a mixtape titled “In Association”. After some time, his musical talent was noticed by the music executive Zach Katz and flew to Los Angeles. He spent two months of his time writing songs for Rihanna, however, it was his bad luck that all of his songs were rejected.

You May Also Like:   Slim Thug Net Worth: How Rich is the Rapper Actually in 2022?

Saint had no option besides returning back home. Though he didn’t lose hope and continued making songs. In 2012, he co-wrote the Hoodie Allen’s song “No Interruption”. He kept writing songs for the singers Gorgon City, Kiesza, and Nico & Vinz. His writing skill was finally appreciated when he wrote the Usher’s two songs “Crash”, and “Rivals”, which were released in 2016.

He finally came up with his first original single using the moniker “Saint JHN”, in 2016. His first song was titled “1999”. Within a short time, he dropped two more songs titled “Roses”, and “Reflex” in 2016. In March 2017, he released his original song titled “3 Below”. He started gaining early notice with the release of his few more songs titled “Hermes Freestyle”, and “I Heard You Got Too Litt Last Night”.

Saint dropped his first studio album titled “Collection One” on March 30, 2018. When the album was released, most of the songs from the album had already received over 50 million streams on various platforms. In April 2020, he released another song titled “Roses”, which peaked at the Number one spot on the Australian singles chart, and the UK singles chart. For the song, Saint won the Grammy Award in the category of Best Remixed Recording in 2021.

Saint dropped his third album titled “While the World Was Burning” on November 20, 2020. The album includes the popular song titled “High School Reunion”, “Monica Lewinsky, Election Year”, and “Pray 4 Me”.

Saint JHN is rumored to be dating Brittany Byrd. Brittany is the ex-girlfriend of the rapper, Lil Uzi Vert. Saint and Brittany have been spotted together for few months. They were recently attacked by the Lil Uzi Vert while working on a business project at the Dialog Cafe. The pair gets shocked with Lil suddenly jumping on their table, and swing hands-on Saint, which he missed.

After failing to punch down Saint, his gun fell from his pocket on the ground. Meanwhile, Brittany got up and approached him. In the response, angry Lil pointed the gun into her stomach and allegedly struck her. Brittany was immediately rushed into the hospital, and as per the reports, she is planning to file a police report on Lil Uzi Vert.

Saint JHN has amassed a total net worth value of $3 million by 2022. He has been able to gather hefty sums all from his music career and writing songs for famous singers. Saint has also worked as a model for Gucci’s Guilty campaign along with the fashion model, Adesuwa Alghewi.

Benzino Net Worth: How Rich is the Rapper Actually in 2022?